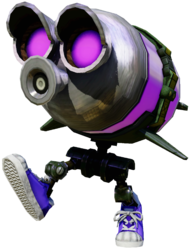 Octopods are pill-shaped Octarians that appear as enemies in Octo Valley, Octo Canyon, the Octo Expansion, and Return of the Mammalians. They run towards the player and explode in ink when close to them.

Octopods are small, mechanical Octarians with two large, purple eyes, a nozzle for a mouth, and two legs adorned with indigo-colored sneakers. When undisturbed, Octopods are calm and meander slowly in various directions. However, when close to a player, they become angry and hiss while running towards them (being slowed down if moving on the player's ink). When they are close enough to the player, they explode in a burst of purple ink. However, they can be splatted before this happens if they are hit with ink. In Splatoon and Splatoon 2, splatted Octopods explode in the player's ink on the spot, whereas in Splatoon 3, splatted Octopods fly backwards and explode on contact with anything, including other Octarians.

A larger variant of the Octopod, called an Oversized Octopod, appears in Return of the Mammalians. It functions similarly to an Octopod, but is much larger, slower, and more resilient, and has a larger blast radius.

Despite their robotic appearance, the Octopod mem cake obtained by Agent 8 in the Octo Expansion seems to imply that Octopods are outfitted Octarians, based on the fact that the mem cake reflects Agent 8's own memories of the Octopod corps and hints at their own remorse for the danger they are forced to put themselves in for the Octarian cause.