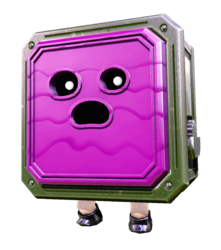 Not to be confused with Octostamp DXs or the Octostomp.

Octostamps are Octarian enemies that appear in Octo Valley, Octo Canyon, the Octo Expansion, and Return of the Mammalians. They are miniature versions of the Octostomp boss.

Octostamps are boxy creatures with large, square faces covered in a layer of purple Ink. Their facial features are very simple and their only limbs are a pair of small legs sporting shiny black boots. Because of the shortness of these legs, Octostamps cannot move quickly but are somehow capable of leaping into the air, landing face-first and spreading a small pool of ink. Being hit directly will result in an instant splat and being caught in the ink given off will do moderate damage. If the player hides too early, a jump can be canceled in mid-air, letting the Octostamp land back on its feet. An Octostamp cannot be damaged from the front or side and must be shot from the back in its red, octopus-like flesh. Its face-first landing after leaping at the player makes this much easier.

Return of the Mammalians introduces a variant called the Amped Octostamp, recognizable by its headphones. When it performs its body slam, it produces a single shockwave that must be jumped over to avoid damage, similar to the shockwaves produced by the Wave Breaker.