Octocommander Fortress
˜ Child of the Battlefield ˜​

Octocommander Fortress
˜ Child of the Battlefield ˜ Octocommander Fortress is the seventeenth mission of Splatoon 2's single player mode Octo Canyon. It is the first of two missions in Octo Canyon to have an Octostamp DX in it. It is also the first mission to use Octocommanders.

On the right of the launchpad from Area 3 is a Bounce Pad. Use it to reach a high-up wall. Ink it and climb it, and the kettle sits on top.

Ahead directly is a launchpad to the first checkpoint.

Ahead is a T-shaped block rotating clockwise. There is an Octotrooper on a concave corner of the side of the block. Use the block to cross the gap, and use the Gusher ahead to climb up. There, an Octostamp approaches from behind a barrier. Defeat it if necessary and climb up the wall to the right to the next checkpoint.

Ahead is a Gusher used to climb up another larger T-shaped block. There is an Octotrooper on a car to the right on the base side, another Octotrooper on the other side of the gap, and a Rolonium on the top of the side. Use the block to cross the gap and use the Ride rail to the next checkpoint.

Ahead are two rotating platforms in a series. These rotating platforms lock in every 90 degrees for about 2 seconds before rotating again. The second one with two Octotroopers on two cars on the two bases of the platform is placed up higher so the player will have to climb up the platforms to cross the gap. At the top is the next checkpoint with a Ride rail behind it.

Take the ride rail to the next checkpoint. 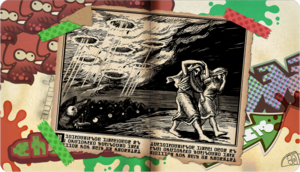 Location: Below the platform of the final checkpoint. Drop down onto the rotating platform then turn back to break the crates holding the Scroll. 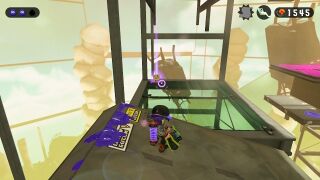 Location: Get onto a car on the rotating block in checkpoint 2, and ink the wall to the left. On top is a lone crate holding the Sardinium. 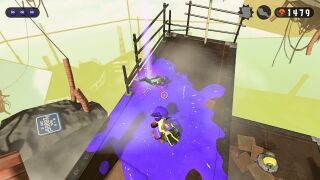 Octocommander Fortress has 3 pieces of armor to collect.

Armor 1 Location: In the top crate of the stack of crates to the right of the barrier in checkpoint 3.

Armor 2 Location: On the side of the first rotating platform in checkpoint 4.

Armor 3 Location: On the side of the first rotating platform in the final checkpoint. 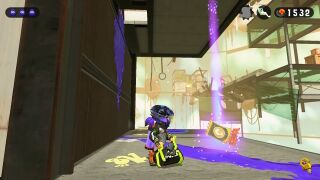