The Kettle for this mission is on a tower in the far right corner of Beaker's Depot. To get to it, after landing on the lower level, find a block with a Propeller, use it to get to a higher platform. Swim up a wall and break a Taped Box to find a Ride Rail. Ride it, then switch to another rail, then ride though a Grate in squid form. Behind the Grate is the kettle. 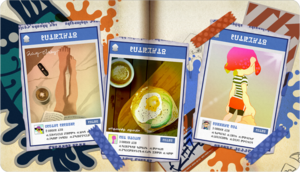 Location: On the left hand side of checkpoint three, there is a platform, which is higher than the checkpoint platform. It has a crate on top, which will reveal the Sunken Scroll after its destruction.

Octo-Resort has 3 pieces of armor to collect.

Armor 1 Location: Directly after the first checkpoint, on top of the first moving wall.

Armor 2 Location: After the second checkpoint, there will be a path, after which one can go left or right. The armor piece is located on the right hand side.

Armor 3 Location: After the last checkpoint, on top of the second moving wall.

Location: After the second checkpoint and after the moving crates section, there will be an Octotrooper. In this area, one can climb up a wall. On the platform will be a crate, which will reveal the Sardinium after its destruction.