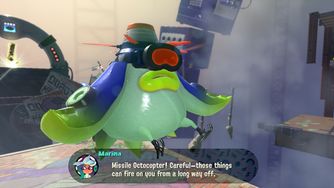 Missile Octocopters are an Octarian enemy appearing in Splatoon 2's Octo Expansion. They only ever appear as Sanitized Octarians. They are similar to Octostrikers from Octo Valley, but attack using Tenta Missiles rather than Inkstrikes.