This article is about the mission. For the character by the same name, see Octostomp. For the mission in Splatoon 2, see The Octostomp Returns. The Mighty Octostomp's kettle can be found in the center of Octo Valley's Area 1. It rests on a large, purple pillow and does not need to be sprayed with ink to become visible. 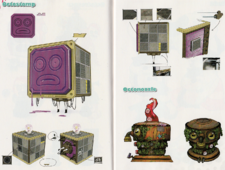 Concept art of the Octostomp.

The Mighty Octostomp is a large cube, with four different layers to its face, including another square which comes out slightly more, the main face area which sticks out again, and the eyes and mouth which both stick out of the face. When on the ground face-first, the Octostomp's face will flatten, but during combat, all four layers stick out; each more than the last.

It is mostly metal with a grey body. The Octostomp's face is covered in purple ink, with its lips being a slightly darker purple and its eyes being green. The Octostomp has two amusingly small legs with black socks, which are somehow able to make the massive body jump, although they are not very useful for getting back onto its feet. Underneath, it also has some hanging wires. On the back of the Octostomp is a small circle filled with ink, where a tentacle can emerge. It can use this to steal Zapfish, but unfortunately also works as its weak point which Agent 3 uses to defeat it.

The Octostomp's sides and top are comprised of nine different panels each, which Agent 3 can use to get onto its back once it is stuck on its face. However, as the battle continues, the number of panels will decrease, leaving empty gaps with electric currents coming out of them. 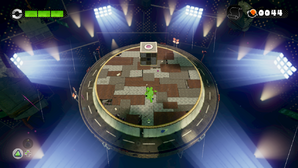 A birdseye view of the arena.

You will start off in the Octostomp's lair on a platform with a spawn point and a launcher straight ahead of you. This is simply a small, safe place to prepare for the fight ahead, so there is not anything to do other than blast off to the main platform and start the fight. While in midair, you are given a view of the arena you have to fight on. It is a large circle with a podium towards the back and strong floodlights all aimed at the center. When you land, you are given a couple of seconds to see the arena from a ground perspective before the screen fades to black automatically and a cutscene begins.

As the cutscene starts, a Zapfish slowly floats down towards the podium at the back, shortly before being grabbed by a tentacle hiding in some purple ink. The tentacle disappears into the podium along with the Zapfish and the camera then zooms out as the podium begins to spark electricity. A few lights flash on its side and it jumps up to reveal a large, ink-covered face which was flat on the ground, as The Mighty Octostomp. Its face then expands outwards, letting out a loud cry as the battle commences.

You will be thrown straight into the action as the camera goes back behind you and the large pink-faced cube ahead charges in your direction, leaving a trail of purple ink wherever it treads. While you may want to shoot it, this will not actually do anything. The Octostomp will try to quickly jump on you, so make use of your own ink to swim and avoid it. As it lands on its face in an attempt to crush you, the Octostomp will spray its own ink around it, so be careful not to get stuck there and waste time.

The Octostomp's tentacle being destroyed.

While it is stuck on its face, shoot your ink up its side and use your squid form to get on top of it. Here, you will find a large tentacle sticking out of its back. Shoot the tentacle with your ink and it will expand multiple times until it eventually explodes, forcing you to retreat automatically via Super Jump to a safe part of the arena. The Octostomp will then re-grow the tentacle in its back and jump onto its feet before turning around and causing some of the metal plates on its side to fall off, leaving a chicane. Again, the Octostomp will let out a cry, this time removing all the ink on the ground as the fight continues.

Like before, shooting the Octostomp in the face will be ineffective, so wait for it to jump, avoid it, and aim to climb onto its back once it gets stuck. This time, however, there will be open gaps in its side. Now you will have to take a chicane upward, avoiding the electric currents coming from the gaps. The Octostomp will also get up more quickly now, leaving you less time to get to the top before it rolls back onto its feet. When you manage to climb up, shoot the tentacle until it explodes like before. Again, you will automatically Super Jump back to a safe area.

The third phase is just like the second, but the Octostomp will lose even more panels from its side, meaning you will have to get across three diagonal squares to reach the top; the two on the sides moving up and down and the middle one staying in place. (This orientation is rotated 90 degrees when the Octostomp attacks, meaning the moving panels move laterally instead of vertically.) The Octostomp lets out a cry, the ink is removed, and the battle continues. 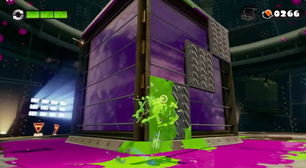 The third way to climb the Octostomp.

Once it has jumped onto its face again, the best way to traverse the side is to cover all three panels in ink, go into squid form on the first panel and wait for it to be in line with the middle panel before moving onto it. Then, wait until the third panel is in line with the middle one, move onto that, then destroy the tentacle for the third time. It is possible to swim up all three panels in a single maneuver.

You now Super Jump away again and the camera goes back to the Octostomp, showing it stuck on its face with its legs spinning in a circle as it malfunctions. Light emits from it as its legs speed up more before coming to a halt. The Mighty Octostomp then explodes, throwing ink everywhere and covering the screen. After the ink clears, you will be rewarded with ten Power Eggs circling the Zapfish right in front of you. Now the arena is completely covered in your ink, so you can easily swim around. Collect the Power Eggs and the Sunken Scroll, destroy the lightbulb the Zapfish is stuck in, and retrieve it. Mission complete!