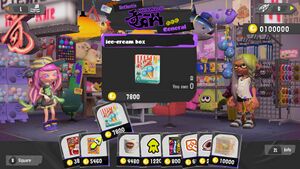 Hotlantis is a general store run by Harmony in Splatoon 3. It is located in Splatsville.

Hotlantis sells stickers, posters, and other cosmetic items for decorating in the locker room that can be purchased with cash earned from multiplayer matches, Salmon Run shifts, and "simple" Mystery Boxes. The store's in-game catalog features seasonal items that are collected as the player's catalog level goes up. The catalog is also swapped out for a fresh one with new items every three months.

Players can click to show the scale of the selected item compared to their locker, and pressing purchases this item. Pressing allows players to enter Crush Station and pressing similarly allows them to enter Ammo Knights, while pressing takes players back to the square in Splatsville.

The manager of Hotlantis is rarely present, so the shop is instead run by Harmony, one of its frequent customers.

The name of Hotlantis is a play on the fabled sunken city of Atlantis combined with "Hotlanta", a popular nickname for the city of Atlanta, Georgia.