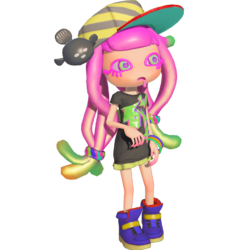 Harmony is a character in the Splatoon series. She is a sea anemone who serves as the singer and synthesizer player of the band Chirpy Chips in Splatoon and Splatoon 2 and runs the general store Hotlantis in Splatsville in Splatoon 3. Prior to Splatoon 3, she was unnamed in languages besides Japanese.

She is accompanied by an unnamed clownfish in her hair. According to HaikaraWalker, it is dying from neglect.[1]

Harmony is a humanoid sea anemone with a skinny build. She has pale skin and long pink tentacles with green and yellow tips that serve as her hair. She wears a black T-shirt with neon green and pink patterns, a short light-green skirt with black shorts underneath, and a black and yellow striped hat with a red and aqua brim. She also wears multi-colored bracelets around her left hand and in her hair and blue boots with yellow straps and soles and red insides. She is accompanied by a black-and-white-striped clownfish that lives in her hair.

Harmony has been described as a relaxed sea anemone that goes her own way.[2] She seems to be easily distracted, as she can be seen fidgeting with a device resembling an Ultra Hand when the player enters Hotlantis. Official promotional material for Splatoon 3 describes her as an artist, and it is mentioned she used to be a regular customer at Hotlantis. Due to the frequent absence of the manager Barry C., she runs the store instead, selling its merchandise to its customers.

She also serves as the lead singer, synthesizer player, and frontwoman for Chirpy Chips. According to HaikaraWalker, she is in charge of the visuals of the band. She exhibits peculiar movements when singing and speaks in a loose manner between songs, which is popular with fans. Due to her voice being altered in the music, she usually lip syncs during live performances. She often lacks motivation and shows up late to band practice. Additionally, she neglects to care for the clownfish that lives in her hair, and it is dying as a result.[1]

When a player below level 4 enters the shop:

(Oh, welcome to Hotlanti- Wait, I take that back. You have to be level 4 to be welcome and shop here. Don't ask me why. Just go to the lobby to play some Turf War Battles. Okay?)

When entering the shop without an internet connection:

(Oh, welcome to Aqua Morgana... Hello. Wait... you're offline. Can you search internet in the lobby or something? Beyond that, I can't, and won't, help you.)

When a player of level 4 or up enters the shop for the first time:

(Oh, welcome. Do you have to be here in Aqua Morgana? Actually, I don't work here, but if you want to buy something, I can just serve the cash register out of the goodness of my heart. What you can do with this stuff? Put it in your locker or something? Super-vague, of course, but fun if you like it. The locker room is in the lobby. Go check it out later. Or don't. Doesn't matter to me. Maybe there's still something from the previous owner in there. Then you're in luck, unless it's blobs of gum. Oh, you want this catalog? Might as well give it to you while we're at it.)

After receiving the catalog for the first time:

(Do you ever do battles and jobs for Grizzco? With that, you can earn Catalog Points that increase your catalog level. Every time your catalog level goes up, you get a prize, which you can collect from me here. Or not, I don't care. But you're here now and I have a prize for you, so just take it so I don't have to lug it around anymore. Okay, now if you don't mind, I'm going back to the store now.)

When a player of level 15 or up enters the shop for the first time:

(I believe Barry wanted to tell you something? That's the owner of this business. He said you're very fresh. And then he did a weird little dance. You should have been there. Or maybe it was best you weren't. He must have been happy or something and now he wants to sell you even more.)

When a player of level 30 or up enters the shop for the first time:

(Oh, welcome to Hotlantis. Hello. The owner, Barry, had a new message for you. He wanted me to make a heart symbol with my hands, but that's really not going to happen. His message was essentially, "Gee! Buy more stuff!" Then he said "Yo" thirty times and he did a new little dance, which again you wouldn't have wanted to be there. Maybe I shouldn't have said that, but who cares....)

After spending 100,000 Cash in total at Hotlantis:

(You've bought quite a lot here by now. For customers like this, Barry has a special message. He thanks you for being such a loyal customer and all that. Then he wants me to say something funny, which isn't going to happen, and give you this badge. I can manage that. Thanks for being in the store a lot. Goodbye.)

When entering the shop:

When receiving a catalog item:

(Has your catalog level gone up again? Okay, here's your prize and goodbye. Good luck with your... everything.)

'When completing a catalog:

(Oh, you already have everything from that catalog? How tiresome. Okay, here's a new one. Don't... eat it in one sitting or something. Just keep on... doing your best and all that.)

After purchasing an item:

(Well, have fun with... decorating your locker and all that.)

When trying to purchase a sold-out item:

When the player has not enough cash:

(You don't have enough money. Boring.)

("...Oh, hello. You're at Hotlantis but... No, wait. I collect everything. You have to be level 4 to buy in here. I don't make the rules. Go to the lobby and join the Turf War Battles or whatever they're called, OK?") - When a player below level 4 enters the shop.

("Oh, hello... Hotlantis welcomes you. To buy here you must have at least level 4. I'm sorry, but the rules are not made by me. Go to the lobby and have some Turf War battles, okay?") - When a player below level 4 enters the shop.