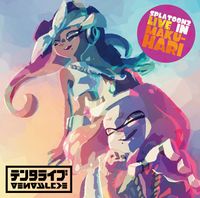 Splatoon 2 Live in Makuhari -テンタライブ- (Tentalive, meaning "Off the Hook Live") is a live album by Off the Hook. It contains a recording of their solo concert at Niconico Tokaigi 2019. Additionally, it also includes in-game music that was not included in both Splatune 2 and Octotune, a recording of the Squid Sisters' performance at Cho Party 2016, and a medley of Splatoon and Splatoon 2 songs by DJ Octavio. A limited-edition of the album comes with a Blu-ray disc that contains the footage of the Tentalive concert from Nintendo's YouTube channel and a bonus "choreography version" of the concert which features direct-feed footage of Pearl, Marina, and the dialogue screen displayed behind them.[1] It released in Japan on 24 July 2019.[2]