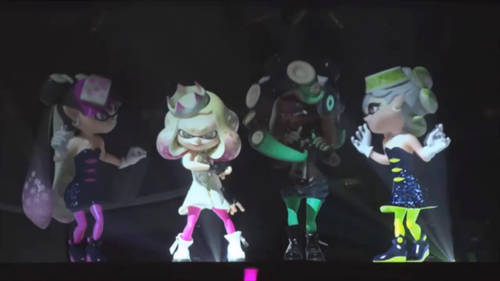 On 13 April 2018, it was announced that Haicalive would be held again at Chokaigi 2018 during the Music Festival. In the initial announcement, it was teased that an additional song had been added to the setlist.[1] On the day before the concert, it was confirmed to be the song used in the Octo Expansion trailer, Nasty Majesty.[2] The Music Festival's live stream where one could view the concert was region locked for foreigners. However, an official video without region lock was made available on Niconico on 8 May 2018.

In addition to the new song, the dialogue between songs was also updated to reflect the 3.0.0 update released prior, and the then-upcoming Octo Expansion. Callie mentions coming to Octo Canyon to accompany Marie, and Pearl mentions checking up on "Gramps and Eight," to which Marina warns is supposed to be secret.[3] Some concert dialogue was omitted in the last talking session before Now or Never!.