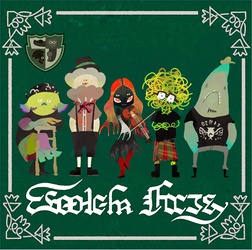 Fins & Fiddles is a song performed by the Bottom Feeders.

Fins & Fiddles is one of the five multiplayer songs released in Splatoon 2 Version 2.0.0. Like all battle songs, it has a random chance of being played during online matches. It is a Celtic punk song that heavily features the fiddle. The song starts with chanting accompanied by guitar and drum hits, eventually joined by the fiddle. The fiddle eventually takes the main melody, backed by guitar, drum, and bass. After the fiddle, the guitar takes the main melody for a moment, before a brief break with the bass and drums. Afterwards, the chorus kicks in, with vocals in the Inkling language, backed by the instruments heard throughout the rest of the song. The vocals from the chorus eventually overlap with the chanting at the beginning of the song, and the song loops. It was first heard in a video on Live from Squid Research Lab, where it was the first song heard.[1] It can also be heard in Squid Beatz 2, with a maximum score of 132 and 253 in Normal and Hard modes, respectively. In Splatoon 3, this song can sometimes play in the Battle Lobby.

The name Fins & Fiddles derives from the song's heavy usage of the fiddle as an instrument, as well as fins being a body part of fish, matching the Splatoon series' aquatic theme. It may also reference Finn Feeder, the in-universe fiddler for the Bottom Feeders.