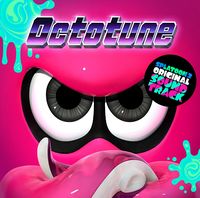 Octotune is the second original soundtrack for Splatoon 2, to accompany Splatune 2. It features two discs, the first of which includes music from Version 3.0.0 and the Octo Expansion, as well as additional sound effects. The second includes a direct-feed recording of Haicalive at Tokaigi 2018. Also included are lyrics to Off the Hook's songs from the Octo Expansion, an interview with Pearl set in her mansion, notes from Cap'n Cuttlefish, and the dialogue between songs for the concert.[1]

A limited edition print, titled Octotune & Haicalive, includes a Blu-ray of the concert, Splatoon 2 Live in Makuhari -Haicalive-, which uses the same footage featured on Nintendo's YouTube channel in 1080i.[2] Both versions released in Japan on 18 July 2018.

It was later followed by Splatoon 2 Live in Makuhari -Tentalive-.

English song titles in quotes are not official and serve as a translation.

The Limited Edition Blu-Ray shares the same tracklist as Disc 2.

The album booklet contains an interview with Pearl in her mansion.

20 Questionsー
Pearl
Into a mansion in the suburbs of Inkopolis

Pearl, from the idol duo Off the Hook currently rocking the charts,
tells us about what's most important, a passion for music, and her "dearest protégé" Marina...
A determined "dragon" in her own words,
what does she look like away from the spotlight?
ーStraight from [her] mansion, in the suburbs of Inkopolis.

Q1: We're super excited to talk to you today! Thank you for accepting to answer our questions.
Pearl: YO! Pearl here, a.k.a. MC.Princess, turning it up in Inkopolis!

Q2: What's so special about Inkopolis?
Pearl: The sunlight, for sure!

Q3: What is the one thing you can't live without?
Pearl: Stages way up high!

Q4: Will you tell us a secret?
Pearl: Well, you're gonna be digging those up now, aren't you? Ask away!

Pearl: Oh yeah, should we go inside?
Q: Thank you.

Q6: What is one thing you want to tell Marina?
Pearl: I got Maguro Odyssey[note 2] yesterday, so let's play at my place!

Q7: What are you craving right now?
Pearl: The Toni Kensa Hi-Tops.
Eight has them, but they released a new color.
Oh, Eight is a friend of mine.

Q8: Is this the living room? The double height's so awesome.
Pearl: Nah, just another shoe storage room.

Q9: Are there any apps you're particularly into?
Pearl: I can't drop this one called KanColle[note 3]. I've been trying to get the golden stingray fin. It's specially Super Rare but I just can't get it!

Q10: Tell us something that annoys you.
Pearl: You know the automatic doors at The Shoal never open when it's just me? They dissing me?

Q11: What kind of food do you like?
Pearl: Strawberry shakes, cheeseburgers... oh, but gherk-OUT[note 4]!

Q12: If you were an animal, which one would you be?
Pearl: A dragon!! I can spit up a killer light beam as it is.

Q14: This is an amazing studio. Is this where you come up with new songs?
Pearl: This is just a soundproof shoe storage room.

Q15: What is your secret move?
Pearl: Speedy side steps, theeeeen backward running! Check it out!
Owie!
Q: Be careful.

Q16: What are your favorite lyrics?
Pearl: The "Wawawawa Wannochai" from Nasty Majesty, probably.

Q17: What is the best gift you have ever received?
Pearl: The chance to meet Marina.

Q18: What do you do in your free time?
Pearl: Chat online. Another thing I can't drop lately.

Q20: Last question. What is music to you?
Pearl: Myself.

Q: Thank you so much for having us today!
Pearl: Right back at ya! This was fun! See ya, then!
Oh, there's a shuttle bus you can take to the entrance, you can go back from there.

Also contained in the booklet is a report written by Cap'n Cuttlefish about the events of Haicalive at Tokaigi 2018.

Hm, the two people who appeared out of that light are Off the Hook... Ms. Pearl and Ms. Marina, aren't they? When I was on my cell phone,[translation 1] I looked into them. Machines these days are incredible! Oh, the song started! Hoho, this is Color Pulse, the song that raises the mood for the youth during festivals![translation 2] Ms. Pearl's "Come on" is followed by Ms. Marina's DJ[* 2] solo! The mismatched manner of these two certainly gives them exquisite compatibility with each other. Inside the Inkling-like cheeriness is an Octoling-like precision, leading to an inner flavor of profoundness. From the very beginning, Off the Hook is wonderful!

A verse like the breaking of the waves... this song is called Acid Hues. Here, this hand-fluttering dance is absolutely wonderful. I heard Ms. Pearl's rap clearly for the first time today, and well, it's quite something. Her timing is lively[* 3], or rather, thrilling, maybe... If one can accomplish this tune, it wouldn't be long before they'd make it big, would it?

The next song, Muck Warfare, started in no time at all! What we have here sounds like the melody of a foreign country's prayer song. Ms. Pearl's fast-talking rap right now is indeed marvelous.[* 4] Youth is a wonderful thing! The singing after that is almost electrifying! And Ms. Marina's piano solo is just as aggressive!

Agent 8! While this duo is marvelous, make sure not to overlook the band in the back! As they hit it on the mark with their performance, they bring out the best in the duo! That's a boon of disciplined work! You should work hard, too!

Hoh! I know this song! This is Ebb & Flow! I've remembered it very well since they blasted it during your battle! With that said, Ms. Marina's singing is quite the best part. It's quite different from my grandchildren's popular song, but I think it's groovy[* 5] and soulful[* 6]!

That is... Huh!? Speak of that, those are my grandchildren, Agents 1 and 2! In their glittering outfits[* 7]... They remind me of their grandmother in her youth. Isn't this song called Fresh Start? Its lyrics are heart-etchingly good. ...Huh? Agent 2 disappeared, and now Agent 1's disappeared... Well, this is the loneliness of living as a hero. That reminds me, Agent 8, I once did a rap for a song those two made.[translation 3] Isn't that cool?

Hmm, it looks like Off the Hook is back on stage. All four of the energetic girls are lined up for a spectacle! The audience's voltage[* 8] is peaking, and everybody's singing! This is Now or Never, the song that's always in battles, so I guess everyone can sing it! Hey, Agent 8, of course, you can sing it!? ...You've adapted completely to the Inkling world. This is my first time hearing it, and the racing beat makes me feel like my blood is boiling and my flesh is dancing! ...But, even to the end, Ms. Pearl is uncontrollable.

Good gracious, the excitement overwhelmed me for so long, I got all sweaty. The four of them up on stage are loved by so many people, it really seems like a blessing. It makes me want to thank all these people and ask for their continued support for these girls.

[Cuttlefish uses a lot of slang that is obscure in Japanese but are mostly commonplace in English. None of these really make sense to see after being translated, but despite that, here are the vocabulary footnotes he attached at the bottom.]