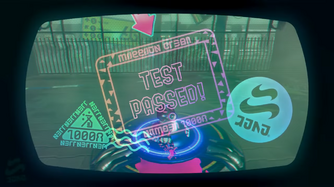 TEST PASSED! is a jingle from the Octo Expansion.

TEST PASSED! is a jingle that is heard when the player completes a level or a test in the Octo Expansion. The song is short, consisting of a synthesiser playing a string of notes, followed by seven orchestra hits. It shares the same opening as the Thang Obtained jingle.

This jingle, along with Thang Obtained, is heavily reworked into Fly Octo Fly. That track has the orchestra hits playing at constant intervals to make up the verse, with the synthesizer playing faintly in the background.