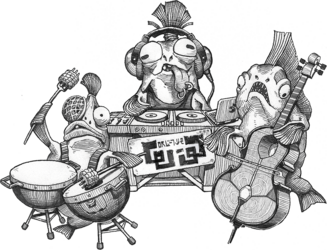 Artwork from Splatoon 2. From left to right: The timpanist, DJ, and cellist.

ω-3 (Omega-3) is a band in Splatoon 2 and Splatoon 3. They are not physically seen in-game, but are credited in Squid Beatz 2, Splatune 2, and Splatoon 2 Live in Makuhari.

ω-3's music, which plays in Salmon Run, are experimental war marches that consist of a cello, a timpani, and synthesizers, sound effects, and other percussion instruments made by the DJ. Their music is usually very frantic, relating to the chaotic nature brought upon by Salmon Run. Their songs also have quite fast tempos which change regularly. They also use a variety of time signatures and rarely use common time (4/4), which helps to add to the confusion and disorientation. Each instrument usually has a solo in each piece, where it is singled out and plays a virtuous piece of music. Strange sound effects are usually thrown into some pieces, emphasizing the strange nature of Salmon Run.

Due to the length of the members' names, they are otherwise referred to by what instrument they play for readability.

The Valiant Green Flame Born in Jigokudani is the timpanist, who plays with all his heart and soul. He is always facing ahead and pushing toward his goals, which is typical for his species. While he's unskilled at taking into account the feelings of others, his one-of-a-kind violent rhythm cheers up and inspires all Salmonid warriors.[2][3][4]

The Faithful Servant of the True Salmon Emperor Hizunamasu

The Faithful Servant of the True Salmon Emperor Hizunamasu is the group's DJ, a rough-tempered Salmonid with an oppsitional stance towards everything, causing him to act disrespectfully towards the other members. However, his talent and reckless-yet-fitting playstyle creates an unpredictable groove that can be said to show the true worth of the band's music.[2][5][4]

The Firstborn Child of Alkyne, the Hidden Blade of Yakiharas

The Firstborn Child of Alkyne, the Hidden Blade of Yakiharas is the band's cellist and composer, and its leader. He is stubborn and does not listen to anyone else nor does he recognize anything else than the most radical works. However, he has a delicate side that cares about atmosphere of a place, but he can only express these feelings via songs due to his clumsyness.[2][6][4]

The band's name is a reference to Omega-3 fatty acids, which are dietary acids most commonly found in fatty fish (such as salmon) and fish oil. This name references the band members being Salmonids, as well as the band being a trio.

"Hizunamasu" is the Japanese name for a dish of thinly-sliced salmon head cartilage and daikon seasoned with vinegar.

"Yakiharasu" ("grilled belly"), spelled in Japanese with an elongated vowel and a flipped word order, references "Shake no Harasuyaki", a dish of grilled salmon belly.