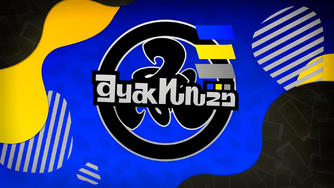 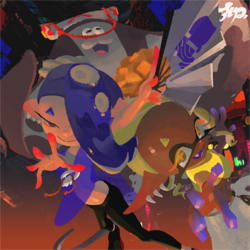 Anarchy Rainbow is a song performed by Deep Cut.

Anarchy Rainbow is an energetic song drawing inspiration from Japanese odori and Brazilian samba music. The song starts with Shiver singing a verse, followed by Big Man speaking to bridge over to Frye's verse, which is sung in a style resembling traditional Indian music. After Frye's verse, the whole band sings the chorus together, after which the track loops.

The brass in the chorus has the leitmotif of Calamari Inkantation; while the notes played are not the same, the intervals between the notes and the overall contour of the melody are very similar.

During Splatfests in Splatoon 3, Deep Cut performs this song in Splatsville. In the first half of a Splatfest, each member of the band stands atop their own float that moves around Splatsville as they sing and dance to their own solo version of Anarchy Rainbow; in the second half, the three floats combine to form one big stage, where Deep Cut performs the full song together. Shiver and Frye's solos each use their own verse of Anarchy Rainbow as well as a unique verse where the other's would be, while Big Man's solo consists mostly of held bass notes. Each solo also features a unique instrumental track featuring instruments associated with the singer. At most two of the three solos can be heard at any given time in-game, synchronizing with each other perfectly. The chorus is not sung in the solo version.

A live mix of Anarchy Rainbow debuted during the Deep Cut Concert at Nintendo Live 2022, consisting of a medley of all four variants of the song. This mix starts with the full version of Anarchy Rainbow before transitioning into three loops of the solo version, using Shiver, Frye and Big Man's instrumentation and lyrics in that order; unlike the in-game version, Shiver and Frye harmonize with Big Man during his solo. After Big Man's solo, Deep Cut closes the song together with one more chorus.

During Splatfests the Anarchy Splatcast theme's intro is intact, but the main song is replaced with a stripped back version of Anarchy Rainbow that lacks all vocals and most instruments. This usage of a simpler version of a Splatfest song echoes the Inkopolis News song featured in broadcasts hosted by Off the Hook during Splatoon 2's Splatfests, which was a similarly stripped-back instrumental version of Color Pulse, the song performed live in the plaza area.

Anarchy refers to the chaotic nature of Splatsville and Splatoon 3 as a whole. Rainbow refers to how the song draws inspiration and has instruments from several different cultures, and also refers to that Splatsville is brightly lit up with signs, lanterns and display screens, much like City of Color and Color Pulse.