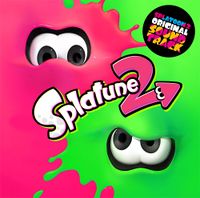 Splatune 2 is the first original soundtrack for Splatoon 2, and serves as a sequel to the first Splatune. It features two discs with 82 tracks total of in-game music and sound effects. Also included are album cover art of the various bands featured in the game, lyrics to the music by Off the Hook and interviews with Wet Floor and Marina. The first production run also came with a Splatoon-themed guitar pick. It was released in Japan on 29 November 2017.[1][2]

It was later accompanied by Octotune and Splatoon 2 Live in Makuhari -Tentalive-.

Some songs contain slight changes in arrangement from the versions used in the game.

From the booklet included with Splatune 2. They are all nonsensical; the Japanese hiragana and katakana simply give the pronunciation.

Also included in the booklet are fictional interviews of some of the "artists" who worked on the in-game music.

Marina (Off the Hook)

Marina (Off the Hook)

Off the Hook is a two-person unit formed by Pearl (MC/Vocalist) and Marina (DJ/Track Maker/Vocalist). Besides being the face of Inkopolis News, their bold take on club music has been embraced all over the place, and even the city's Splatfests and battles have been dyed into their colors. Marina, who has become the core of its sound, will tell us a little bit more about its production.

Please tell us about the flow in writing Off the Hook's songs.

First of all, I make the main rhythm and a chord progression of about four bars. It's very thick at first, full of lots of sounds, so it keeps getting bigger as I remove and add new ones. The melody and lyrics are done way after.

Do you take Pearl's rapping into account at that stage of the process?

No, I leave all the decision-making regarding the lyrics to Pearl. I only decide the composition.

How are the recordings for the rap and vocals made?

First, I'd take my vocal part, and finesse it with as many takes necessary until it feels like home. Pearl will always say "Marina, you're such a perfectionist!" "You're overdoing it!" (lol). After that, I'd go to the studio and record Pearl's rap. I'm always surprised that, even though it's done in one take most times, sometimes it'd need two takes, she'd say "I'm exhausted! is it ok now?" But that's all she needs for it to be spot-on. She has this speediness that I can never achieve...

Regarding the musical background, are there any artists that influence you?

The Squid Sisters! I've been in touch with their producer, Shy-Ho-Shy, and I love them... even though it sounds a bit presumptuous. I could go on about that all night long (lol). I'd like to talk about the effect of how their cover of the "Calamari Inkantation" is intentionally out of scale in a few places. The Squid Sisters are definitely my roots, but even if I stood on my head, I couldn't create a world like that. So, I'm hoping to create songs that have an "Off the Hook style" alongside Pearl.

Speaking of the Squid Sisters, you made a cover of their "Now or Never!" song, right?

Yes, Pearl said, "We gotta do this one after all!". Even though the Squid Sisters' version is also a cover (of Squid Squad), I was very nervous about it, so I told Pearl, "I'd like to leave the vocals to you if you don't mind...". But I had lots of fun making the tracks. I came up with an effect so the vocals wouldn't feel lonely despite being sung by one person.

"Color Pulse" has now become the main song for Splatfests.

I was told by the event organizer, "This is what Splatfests will be like from now on, so please make a song that will make everyone excited." as they showed me an amazing sketch full of glittering lightning. Then they asked, "Could you make it so when getting a signal from the equipment, the lights would move according to the tempo?" and I said, "Let's give it a go!". With that in mind, I got really passionate while making the tracks. Just seeing all the fans in the streets made us both really fired up.

Another thing about this song, your track has this characteristic where there would be exotic sounds and phrases that appear from time to time. It kind of feels abrupt and choppy, what's the intention behind that?

I say it all the time but it's just something I naturally do... like when I turn off the sound according to the beat, I definitely enjoy cutting the left-over reverberation in a weird way. I guess it's because of the DNA inside me. It seems like it's something I like to do.

In "Ebb & Flow", the first half feels like it gets more and more fired up, which contrasts with the lyrical movement of the second half.

It sure gets fired up, huh? Since you'd eventually get used to the "Tasty" part as it kept going, I left it for later, so when it started to feel like "Not enough" it'd switch to the next part. Oh right! I just remembered! In that latter part, Pearl and I would alternate vocals. At that time Pearl suddenly hesitated during the recording and said "Marina, leave me alone for a sec!". Guess she must've been a bit embarrassed about not singing properly. Oddly enough, we did a lot of takes (lol).

Do you get any track requests from Pearl?

Lots of them. Though I wouldn't call them requests... She'd go like "Something's wrong!" or "The rap feels rough". It would bring me down a bit at first, but after taking a better listen myself, I'd think the same way. And after I send it, she won't stop saying things like "It's amazing Marina! I knew you could do it!"

From now on, what kind of evolution can we expect from Off the Hook?

By supporting each other with our strengths, I want to keep entertaining everyone in Inkopolis Square! Not only that, I'd like to also release mellow and chill-out tracks someday. I think that the greatest thing about music is that it has the power to go beyond differences in species and language. It makes you want to root for someone you've never met before. That's how I personally feel when making my tracks.

Just when we think we understand them, they get away from us. Wet Floor is that kind of band. They don't fit inside the box. They don't do what we'd expect. And yet, before we knew it, their music had become deeply ingrained in our hearts. Their latest album "Inkoming!", which has a completely different atmosphere from their previous album "Color Rush", is no exception. I asked the five members about their thoughts on the album.

⏺This album feels so colorful and changing in a way that I never get tired of. Not only that, I thought that it was overflowing with freshness as if it were a piece cut from the "now" of Wet Floor and Inkopolis Square.

Mizo (Vo. G): Yeah, for example, I love old music that was popular before I was born, yet I take the stance that "I take from this era I am living now, so I should give back too," which is what I do when I play with Wet Floor.

⏺At the same time, I was reminded of how "twisted" Wet Floor is.

Mizo: As far as we're concerned, we don't mean to be twisted.

Ryley (Vo. G): Oh but you're so twisted. You play chords that are totally different from mine and Neil's!

Keaton (Synth): I guess I want to create music that is like "a picture that cannot be fully understood at first glance".

⏺This might be a bit of a nasty question, but it could be called "not catchy."

Mizo: I wonder if that will happen.

⏺At least it's not the "straight-up naughtiness" that was sweeping Inkopolis a few years ago.

Mizo: Ah, yeah, that's the kind of thing I wanted to do. Those days were filled with an unbridled "excitement to see the world for the first time" kind of feeling. Now we've let it seep into our bodies, and our output is a kind of a "determination to keep on sharing it with like-minded people." I don't know if I'm putting this well.

⏺I see. For example, when you guys covered the iconic Squid Squad song "Now or Never", which seems to be a symbol of those days, you have a big group of people chanting "Yeah..." in a laid-back B-melody.

Ryley: That's right. We changed the chord progression there too, from the original song.

⏺Or in "Inkoming!", you stir up some excitement in the first bars (spla spla la o nyalo/ink o sink fazaro), but the chorus (yuganashoshiyasei/ nigochunowanowanasa), shows off a little "longing for others".

Mizo: Yeah, that chorus is something we wouldn't have been able to sing in the past. To be honest, I was hesitant while writing it. But when you're in a live setting and you're getting excited with the audience, all that hesitation just fades away.

⏺By the way, what is the difference with the version of "Inkoming! (Cloud Demo)" that was recorded at the same time?

Keaton: I initially wrote this riff and uploaded it to the cloud. And then everyone else did whatever they wanted with it at home. First, Neil added in a slapping bass line.

Neil: In the end, I held back a lot on the bass lines. I didn't hold back on "Rip Entry" though. (Laughs)

⏺It's a four-on-the-floor tune that starts with a very "springy" guitar. The weighty rhythm section feels great and makes the floor sway vertically at concerts. It's not just in this song, but the way Neil and Candi mesh with each other is unbelievable.

Ryley: Even on days when we go to the studio, they start practicing the rhythm line a couple of hours early.

Candi: Hey the songs are hard! It's fun though.

⏺What was the most difficult song for you two to play?

Candi: It's definitely "Don't Slip". That riff is in such a weird time signature! Surprising that Ryley wrote that riff.

Ryley: When I was working on it, I didn't realize that it had an odd time signature, but when I recorded it on my computer, I thought, "Huh? Something's weird about it... (laughs)

Neil: The drum 'n bass in "Undertow" was pretty tough too. The break comes so fast.

⏺Are the other songs built off of a riff?

Keaton: Basically, yes. Someone uploads a riff, and then everyone adds to it.

Candi: The only difference is in "Endolphin Surge", where all of a sudden, Mizo made the melody first instead. That's the intro.

⏺It certainly starts with a kind of embarrassingly classic feel, but it doesn't stop there, as what happens after that is dizzying. That's what makes Wet Floor so unique. And that fierceness isn't just in the songs; as I said at the beginning of this interview, I think it can be said for the variety of the song's musicality too. The album itself has a completely different mood than your previous works.

Mizo: Are you bored of it? What is that "what we haven't done yet?" That's what I'm always looking for when working on the next song.

Keaton: It's just like in Turf Wars. "I've already inked this place! Is there any place I haven't yet?" (laughs)

⏺Maybe there's another band that will 'ink you back' even more.

Mizo: Wouldn't that be super interesting? It'd be exciting to see the music scene become more colorful like that again.