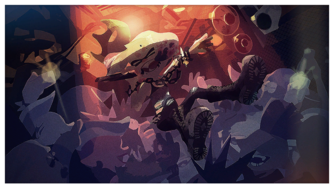 #$@%* Dudes Be #$@%* Sleepin is a fast-paced heavy metal song featuring harsh guitar, bass, and drums in the background, with lyrics by Pearl. The song is apparently vulgar, due to its title, the fact that it never played on the radio for "obvious reasons," and the censor bleep heard in the middle of the song. At the end of the performance, a large crash can be heard (implied to be Pearl's loud voice destroying something in the venue), followed by grumbling from the audience, and Pearl speaking into the mic.

It was first heard as a music file in session nine of Marina's chat room under the file name rec_bow_down_ball_gig08.mp8. Pearl brought up the song as she and Marina were reminiscing over her early career, mentioning that it only sold 1,000 copies from both physical and digital sales, and stations refused to play it due to its explicit nature. They would release Ebb & Flow soon after, kicking off their ascent to fame.

The title appears to be an expression of anger from Pearl about the unhelpfulness of her teammates in battles, which is supported by the song's names in other languages. The grawlixes are used to denote that the unseen full title is vulgar.