Tentalive at Tokaigi 2019 (テンタライブ 闘会議2019(JP)[a]) was a virtual live concert that took place during the Fourth Splatoon Koshien Tournament (第4回スプラトゥーン甲子園(JP)[a]) at Tokaigi. It was the first solo concert for Off the Hook, with songs from the Octo Expansion being performed live for the first time. 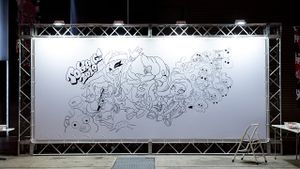 A mural at the Splatoon area. Attendees were able to draw on the blank space.

On 13 December 2018, it was announced that Off the Hook would be having their first solo concert at Tokaigi 2019 on 26 January 2019, titled Tentalive. The name is a portmanteau of "Tentacles" (Off the Hook) and "Live". The concert was streamed simultaneously on Niconico and YouTube by Nintendo, along with the rest of the events of the fourth annual Splatoon Koshien tournament. This was the first concert in Japan to take place at the same stage as other Splatoon-related events being held. While an official archive of the seven-hour live stream was left up on YouTube, the concert was uploaded individually on 1 February 2019. On 25 April 2019, Nintendo of America and Nintendo of Europe uploaded localized versions of the concert.

A live album, titled Splatoon 2 Live in Makuhari -Tentalive-, was released in Japan on 24 July 2019 in two editions: a standard edition and a limited edition that comes with a Blu-ray. The Blu-ray contains the original recording of the concert and a "choreography version" that features close ups of Pearl and Marina present throughout the duration of the concert.

Song: 「Inkoming!」
Song: 「Chip Damage」(Blitz It!)
Song: 「エントロピカル」(Entropical)
Song: 「ナスティ・マジェスティ」(Nasty Majesty)
Off the Hook start to rise onto the stage along with Marina's equipment, as if on a stage lift.

During the song, Pearl takes the time to introduce the band performing along with Off the Hook. After individually introducing each member, they each have a solo.

Off the Hook disappear into the background. They come back shortly, wearing their casual outfits.
Song: 「ミッドナイト・ボルテージ」(Shark Bytes)
Song: 「フレンド・フロム・ファラウェイ」(Into the Light)

As the song ends: