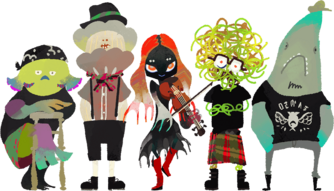 The Bottom Feeders are a five-person Celtic rock band. Their songs were added in Splatoon 2's Version 2.0.0. They originate from a country up north, and predominantly perform live, spending most of the year on tour. They have been consistently using their own label ever since their debut. In-universe, it is stated that the organization of their performances, as well as the songs' progression, often change depending on the mood of the members.[2]

In Japanese, each song title has an English part and a Japanese part; for localization, only the English part was kept.[3]

Finn Feeder is the fiddler, a glamorous tropical betta fish and the focus of the band's sound.[4] They want to share the goodness of traditional music's sound no matter how much the world changes. They have a stubborn personality, and often do things in their own way, leading to the band almost dissolving on multiple instances. They have been seen showing aggressive behavior to Tangle Feeder in artwork. This may be based on the aggressive nature of betta fish.[5] They do not get along with the members of Ink Theory, which debuted at the same time.[2]

Tangle Feeder is the vocalist, a man made of the edible seaweed mozuku and the leader of the band.[4] In their album art, he wears a plaid kilt, combat boots, and large square glasses, reflecting the band's fusion of various styles. He is a young man with a rebellious spirit, dissatisfied with how voguish music has become and wishing to return to more straightforward styles. However, the songs he writes are mediocre, and the other members are quite harsh on him. Up until recently, he was unaware of where his voice was coming from, but it turns out to be produced by the friction of the string-like organs that make up his body rubbing against each other. For unknown reasons, he seemed pleased with learning that he is able to sing with his feet.[2]

Murdoch Feeder is the guitarist, a Yesso scallop with a weakness for cute girls. Unlike Finn Feeder and Tangle Feeder, they are not as particular about the sound of the band and are fine with anything as long as they are having fun.[2]

Jawn Feeder is the bassist, a shark that likes motorcycles and meat. Much like Murdoch Feeder, they are fine with doing anything as long as they are having a good time.[2]

Bertie Feeder is the drummer, a globefish who wears a plaid kilt similar to that of Tangle. Like Murdoch Feeder and Jawn Feeder, they also don't care much about the band's sound as long as they are having a good time. They are a member of a Rainmaker team with Kuze and Ryu Chang, and they have an only daughter that they care for and adore.[2]