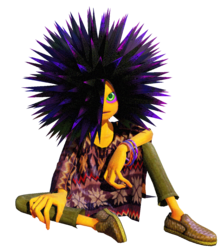 Spyke is a character in Splatoon and Splatoon 2. In the former he is found in the back alley of Inkopolis Plaza and provides various gear-related services. In the latter, he can be seen in a café in Inkopolis Square and cannot be interacted with.

Spyke is a sea urchin with orange skin and dark purple, spiky hair with lighter purple tips. His eyes are green and the sclerae of his eyes are purple.

In Splatoon, he wears a dark-colored poncho, multi-colored bracelets, green pants, brown shoes, and clogs. Under his poncho, he wears a black undershirt. He sits on a rug that looks similar to his poncho.

In Splatoon 2, his poncho is black and white and he wears black and silver rings on both hands. His eyes are more reflective and his irises glow in the dark, as seen when he looks up during a Splatfest.

Spyke provides services that allows the player to improve the secondary gear abilities of their gear, which are unlocked by talking to him after reaching level 4.

Viewing the order queue from Spyke

The player can order up to three pieces of gear at one time from other players in Inkopolis Plaza, which are put in a queue. If they order more than three pieces of gear, another order will have to be canceled to make room for it, and the new order will appear at the back of the queue. After midnight (according to the system clock), the first gear in queue will be available for purchase and must be bought from Spyke that day, or he will get rid of it the next midnight for the next gear in queue. However, he will not remove gear in the player's queue on days when the game is not played.

Only gear obtained from shops plus the starting gear (White Headband, Basic Tee, and Cream Basics) can be ordered.

Unlike at the shops, the player can order an item from Spyke which they already have. If the player chooses to buy an ordered duplicate gear, it will replace the one in the player’s inventory. This can be a cheap way to "reroll" secondary gear ability slots, but only with patience — buying an ordered three-star item with three empty secondary gear ability slots only costs 15,000 cash instead of rerolling said gear for 30,000 (see below), but the slots will have to be filled through online battles.

An ordered gear can inherit less secondary gear abilities than the original gear, but leveling up slightly decreases the chance of this happening. A table detailing the odds is listed below.

The price of an ordered gear is higher than in the stores. The more stars and abilities it has, the more expensive it is. A table detailing the prices is listed below.

At any level, for one Super Sea Snail, he will tweak the abilities on one piece of gear. After reaching level 20, if the player has no Super Sea Snails, they can pay with 30,000 cash for each service.

In the North American version, Spyke's dialect is similar to that of a Cockney or Australian. However, his dialogue is drastically different in the Europe/Oceania version, being more of a straight translation of the Japanese dialogue.

In Splatoon 2, Spyke has a very minor role, as his previous role was replaced by Murch, who works for him after being inspired by his success. Spyke made so much money during Splatoon that he no longer needed to work.[1] Sunken Scroll 5 shows that he has created a "get-rich-quick scheme" guide, and it is implied Murch has followed this guide and looks to Spyke as a role model.

In this game, Spyke can be found sitting with a laptop in an inaccessible café inbetween the Deca Tower and the Deepsea Metro entrance in Inkopolis Square, although nothing is shown on his laptop.

Spyke is a corruption of spike.