In Splatoon 2, the Splatfest Tee Replica became available for all players to wear at any time from Version 5.0.0 onward after the end of Splatfests; it is made by the same brand and has the same main ability as the regular Splatfest Tee.

The Splatfest Tee took on a variety of appearances depending on the Splatfest for which it was worn and the team the wearer was on. Its UI icon used a default design that was also applied when viewing players in Inkopolis Plaza or Square for a Splatfest in another region or after a Splatfest has ended.

Its basic structure was always the same: a short-sleeved shirt that is primarily one solid color with an illustration of the wearer's chosen team on both the front and back, accompanied by a light-colored plastic wristband worn on the right wrist. On the wristband is the SquidForce logo in white, and at the left side of the hem is a small white tag with the same logo in black. On the upper back of the shirt is SquidForce's name in white Inkling text, which glows in the dark in Splatoon 2. The wristband changed color to match that of the wearer's ink, allowing it to be a different color from the Tee when worn before a Splatfest. 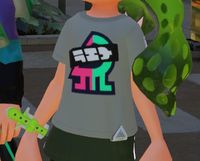 The generic design in Splatoon 2.

The Splatfest Tee also had a "generic" model, with the design shown in the item image. This model was shown when the specific team version could not be loaded. Other than hacking, there are two situations when this could happen:

The wristband for the generic Splatfest Tee has no set color, and always roughly matches that of the wearer's ink.

The Splatfest Tee comes with Ability Doubler as the primary ability, which, being exclusive to the main slot of Clothing, prevents the wearer from also having Haunt, Ninja Squid, Respawn Punisher, or Thermal Ink. As a 3-star item, the Splatfest Tee comes with three additional slots for secondary abilities. Since it is made by the SquidForce brand, it has a higher chance of rolling Ink Resistance Up and a lower chance of rolling Ink Saver (Main) to fill its secondary ability slots.

In Splatoon 2, scrubbing the Splatfest Tee with Murch costed only

2,000 rather than the standard

20,000, making it an effective way to build up ability chunks quickly. Starting in Version 4.0.0, the Splatfest Tee continued to gain experience after filling all three slots, awarding a random ability chunk every 7500 points - this only occured during the Splatfest itself and not in the period of time following the announcement before the event.

A jellyfish in Splatoon 2 wearing a sleeveless Splatfest Tee.