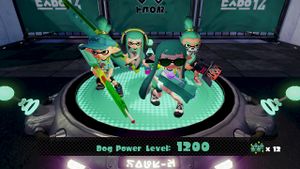 Power level, also known as Splatfest Power, League Power or X Power, is a rating feature introduced in version 2.6.0 in Splatoon that replaced the vibe meter during Splatfests.

The concept of power level was extended to all multiplayer battle modes in Splatoon 2.

Before 2.6.0, for the Japanese Splatfests, Top 5 of each team were the MVP of that Splatfest and were announced in

In version 2.6.0, the power level feature was added to replace the vibe meter during Splatfests.

The top 100 players in each team are titled as the "Splatfest Top 100". Rankings were based on players' Splatfest Power earned throughout the duration of Splatfest.

The Splatfest Top 100 rankings were announced at the

Live from Squid Research Lab for North America and

SplatoonUK for Europe and Oceania.

In the lobby, at the top-left corner of the box showing the player's Splatfest Power was a pair of eyes representing the Squid Sister they had sided with: players on Callie's team saw scowling eyes and those on Marie's team saw more laid-back eyes. Both versions had their signature pupils, but with a dark red color instead of the usual gold.

In Splatoon 2, The power rating got changed to Glicko-2 rating system.[2] The power level rating had expanded to all multiplayer battle modes of Splatoon 2.

The opponents' power ratings are put together as a single value and used when calculating a new rating power for the player.

After a win or a loss, the rating doesn’t always go up or down by the same amount. A few things can affect how much the player's rating changes after they play a game. Some things that can affect this are:

Number one is, if the player wins against a team who has a much higher rating than them, their rating will go up by a higher amount than if they win against a team of the same rating, or of a lower rating.

Similarly, if they lose against a team with a lower rating, their rating will go down more than if they lost to someone with a higher rating.

Numbers two and three on the list are about confidence. Confidence in the rating is the main reason for big changes in the player's rating after a game.

Another part of this system is the 'rating volatility' or RV, which measures the degree of expected fluctuation in a player's rating.

Regular Battle has an internal power level[3] that is not exposed to the player. The initial Power is 1,600, with 250 RD and 0.6 volatility. The rating affects the initial starting values of the Splatfest Power level.[4]

The Splatfest Top 100 rankings are announced in SplatNet 2. 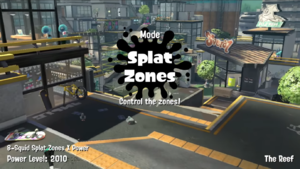 Power Level of the lobby, displayed in the bottom left corner. (Visible after completing ten matches for player's power level)

The player has a power level for each Ranked mode, although it is never exposed to the player until they reach Rank X. The initial Power is 1,600, with 250 RD and 0.6 volatility[5]. There are ten calculation matches and after that, the player can see in the bottom left corner before every match, the power level of the lobby.

The game has a list of target power levels - one for each rank. If the player's power exceeds one of these thresholds when they rank up, the game skips them to that rank.

With the addition of Rank X at version 3.0.0, the rank bar was replaced with an "X Power" level. Each month, X rank players get their power level reset. The power level is exposed after the calculation period that lasts 10 matches. After every month, for each of the 4 different Ranked Battle modes, 500 players with the highest X Power are announced on SplatNet 2 alongside their most used weapon in the last 50 matches in that mode.[6]

The initial starting values of League Power is based on the players' Ranked Battle power.[4] The players' power ratings are put together as a single value and used when calculating a new rating power for the team. Players get their League Power revealed to them in the lobby after seven matches. Only the League Power of the enemy team can be seen before the match begins. Every change of rotation, the mode and stages change and with that the League Power resets.

Bronze Medals and the top 100 of the rotation are displayed in past records.

Since February 2019, every month there is a scheduled League Battle rotation announced on

@SplatoonJP Twitter for Team of four with set mode and stages. The top three teams, plus one additional team, receive a unique picture of their characters with their weapons and gear at one of the stages played. The criteria for the additional team cycles every month, alternating between being the 101st team, the team with the median score overall, and the highest-scoring bronze team.