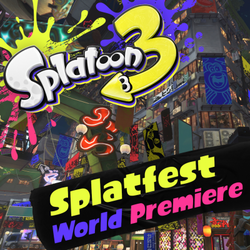 The Splatoon 3 Splatfest World Premiere was a free Splatoon 3 demo. Much like its predecessor, it allowed players to engage in up to twelve hours of four-versus-four Splatfest Turf Wars ahead of the full game's release.

The demo was made available to pre-order on 10 August 2022, immediately after its reveal in the Splatoon 3 Direct and pre-loads began on 18 August 2022.

There were seven stages available in rotation, as opposed to the twelve in the full game. Stages for Splatfest Battle included: Scorch Gorge, Eeltail Alley, Undertow Spillway, Mincemeat Metalworks, Museum d'Alfonsino, and Mahi-Mahi Resort. The only stage for Tricolor Turf War was Sturgeon Shipyard.

This Splatfest also introduced a new mode, called Tricolor Turf Wars, where in the second half of the Splatfest, the three Splatfest teams could play in a three-way Turf War.

The demo also included a seven-day free trial for Nintendo Switch Online to allow anyone to take part, which was emailed to players when the demo began.

The demo was able to be played for twelve hours from each of the following times: