The mailbox is a service in the Splatoon hub that allows players to create drawings and share them via social media.

The drawings may be viewable by other players and may be displayed as signs or graffiti in the hub and in various stages in multiplayer matches.[1][2]

During Splatfest, players could post drawings that may appear during the event. 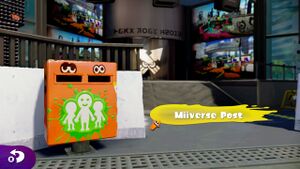 In Splatoon, players could post to Miiverse's Splatoon community from the mailbox in Inkopolis Plaza, either with text or a drawing, both of which were created on the GamePad.

Location: It is located between Ammo Knights and the Inkopolis Tower. Close left to the mailbox, the Splatfest booth was held before and during Splatfests.

The Miiverse service has been shutdown and it is no longer possible to draw posts in Inkopolis Plaza. 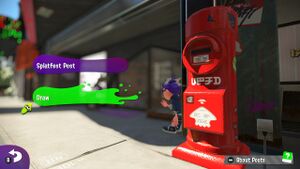 In Splatoon 2, players are now able to share their posts on social media in Facebook or Twitter. Since Miiverse went defunct, the messages are handled by the game itself.

Location: The mailbox is located between the headgear shop Headspace and the weapon shop Ammo Knights. The Splatfest booth was close-by near the center of Inkopolis Square. 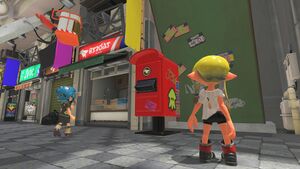 Stand with mailbox in Splatsville.

In Splatoon 3, a mailing stand with a mailbox can be seen in the promotional images of the main hub; Splatsville. New to Splatoon 3 is the option of vertical banner posts, allowing players to draw vertically-aligned images.

Location: the stand is seen to the right of the hub in the main boulevard.