The Tri-Stringer is a main weapon in Splatoon 3. 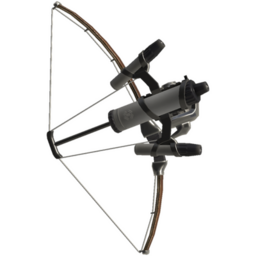 It appears in 6 missions in Alterna:

The Tri-Stringer resembles a bow and arrow or a miniature ballista, but made out of parts of a fishing rod, including a reel and string.

When the Tri-Stringer is fired with a tap of , it launches three projectiles of ink, each dealing 30 damage. The Tri-Stringer can shoot horizontally or vertically, depending on whether the user is jumping or not (in either case, the projectiles will travel in an arc and can be used to easily target areas behind cover). The Tri-Stringer is also capable of charging its shots and incorporates elements of both chargers and splatlings. Like chargers, the weapon has a telltale glow when charged and fires once for each release of . Much like splatlings, however, the weapon also possesses two rings indicating its charge: these signify the points at which its shots become strongest and fly furthest & closest together, respectively. To fire the weapon, the user pulls back on the string, which changes color depending on the user's ink, and then releases it after a short period. [3]

If the weapon has been charged sufficiently (at least one ring of charge), the Tri-Stringer will shoot three projectiles resembling dynamite which will explode after a few seconds. The ink tanks on the weapon and the bowstring seem to light up for a short period after being fired. Any charged 'arrows' that hit an opponent directly deal 35 damage, for a maximum of 105 damage with precise aim. Any projectiles of a charged Tri-Stringer shot that do not strike an opponent will stick to surfaces for just under a second, appearing as a small lump of ink that gradually glows brighter, and will then explode dealing 28 area-of-effect damage (per arrow, for a total of 84 damage if struck by all three explosions) and inking in a short range.

Reaching certain Freshness levels with the Tri-Stringer will reward the player with special badges that they can use on their Splashtag.