The E-liter 4K Scope is a main weapon in Splatoon 2 and Splatoon 3. It is the scoped version of the E-liter 4K. Although it cannot store a charge like most unscoped chargers, it has the longest range. 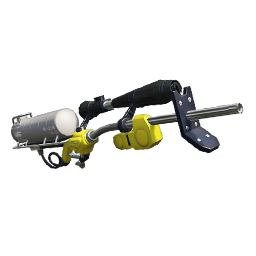 Differences from the E-liter 3K Scope

The E-liter 4K Scope was initially shown in the announcement trailer for Splatoon 3 on 18 February 2021 with a new design.[2] On 9 May 2022, its scopeless variant was revealed alongside its name, E-liter 4K, which is the same as its Splatoon 2 name,[3] but the scoped variant remains unnamed specifically. While the E-liter 4K Scope's sub weapon is currently unknown, it appears to have the Tenta Missiles as its special weapon.

For competitive tips about the E-Liter 4K Scope