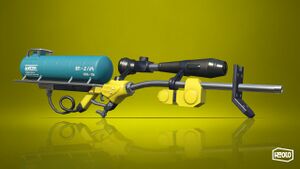 The E-Liter 4K Scope's range and pressure best suit it for the Anchor role:

The E-Liter 4K Scope's long range and high damage allow it to provide support fire and help maintain maintain spatial control, despite its lack of turfing compared to most of the other weapons of a team's composition. Therefore, it is generally redundant to have more than one long-ranged weapon on a team for a few reasons:[6]

Because the E-Liter 4K is inefficient at turfing without full charges, its user will have to rely on their teammates to maintain map control. Not having enough turfing ability – usually from having too many blasters and chargers – presents its own set of problems:[6]

Ink Mines cannot be thrown and cannot inflict lethal damage, making them less versatile than most bombs — particularly either Splat or Suction Bombs, which provide their user's team a couple advantages over another team that has no lethal bombs in its composition.[6]

Ever since its introduction in Version 4.3.0, Bomb Defense Up DX will not only reduce the damage taken from opposing sub and special weapons that are not one-hit-splat but will also reduce the duration of the tracking effects of certain opponent's sub and special weapons, such as Point Sensors and Ink Mines, allowing the user of this ability to evade detection more easily. Since the E-Liter 4K Scope is prone to being attacked by bombs and Tenta Missiles due to it being an anchor, having this ability is great for improving its survivability - especially considering how slow it is. Just three ability points, or one sub, offer plenty of utility:[9][10]

The E-Liter 4K Scope needs to consume a large amount of ink (25% of the ink tank) to fully charge its shots. Ink Saver (Main) not only allows it to fire more fully charged shots per ink tank but also conserves ink for a potential Ink Mine, in case an opponent gets too close.

Main Power Up increases the range and turfing ability for the E-Liter 4K Scope. While it already has the best range of any weapon, the extra range can allow the user to snipe opponents from further distances. The increased painting ability also lets the user farm Ink Storms more often.

Quick Super Jump decreases both the "charge" time before and the travel time of a Super Jump, allowing its user to escape more quickly. An E-Liter 4K Scope wielder is usually vulnerable in close quarters and would also have an incentive to maintain valuable special gauge progress for their Ink Storm.

With its range, the user can splat opponents without entering into enemy fire, leaving the user splatting opponents more than getting splatted. Respawn Punisher can be used to increase the time opponents are splatted, allowing a team to follow up with a push, with a less chance of the user being punished themselves.

Due to being a heavyweight weapon, the E-Liter 4K Scope inherently slows the swim speed of its user. Swim Speed Up enables them to more quickly return to the site of engagement, more quickly respond to an opponents' push, and better keep their distance from aggressive opponents.[9]