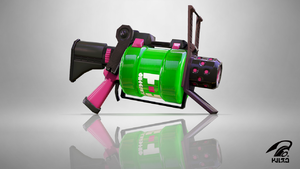 The .52 Gal holds a niche of being able to lock down areas with its sub and special weapons on certain narrow maps, such as Port Mackerel, Camp Triggerfish, Walleye Warehouse, and Arowana Mall.[1]

The kit and high rate of damage of the .52 Gal make it slayer:

However, the .52 Gal has a few notable drawbacks:

Killer Wail is a versatile special that the user will often have due to its cheap cost of 160p.

The .52 Gal can be reduced to a 3-hit kill with just one Defense Up main ability or 3 Defense Up sub-abilities. Since the .52 Gal fires slowly compared to other shooters of its range such as a Splattershot, a single extra hit needed makes a significant difference, so at least a small amount of Damage Up is strongly recommended. 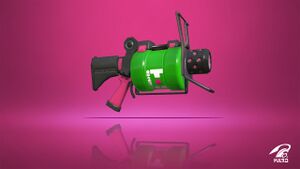 The .52 Gal – along with its Deco and Kensa variants – has a powerful two-shot splat and – ever since the Version 5.4.0 update – good turfing ability, which is augmented by its range, which exceeds that of other short-ranged shooters. This variant has a kit designed around tracking and aggressively pursuing opponents, using Baller to improve survivability during either pursuits or escapes.

The .52 Gal was overall significantly buffed compared to its appearance in Splatoon.

The .52 Gal's lack of lethal bombs – particularly either Splat or Suction Bombs – generally necessitates its user's teammates to equip weapons that include them. Lethal bombs provide their user's team a couple advantages over another team that has no lethal bombs in its composition:[8]

Ever since its introduction in Version 4.3.0, Bomb Defense Up DX will not only reduce the damage taken from opposing sub and special weapons that are not one-hit-splat but will also reduce the duration of the tracking effects of certain opponent's sub and special weapons, such as Point Sensors and Ink Mines, allowing the user of this ability to evade detection more easily. Just three ability points, or one sub, provide plenty of utility:[9][10]

A .52 Gal user will inevitably come in contact with the opponent's ink on various surfaces — mostly resulting from opposing bombs and Tenta Missiles, which can both be damaging and reduce mobility. Ink Resistance Up not only partially offsets the reduction in mobility but also delays the damage taken from contact with opposing ink:[9][10]

While powerful, the .52 Gal has a high shot spread compared to other short-ranged shooters, reducing its ability to splat opponents consistently. Main Power Up reduces the shot spread by up to 20% while on the ground and by up to 50% when jumping, increasing the main weapon's precision.[11]

Quick Super Jump decreases both the "charge" time before and the travel time of a Super Jump, allowing a .52 Gal user to escape unfavorable situations more easily to preserve precious special gauge progress, or more quickly return to the front lines after being splatted.[9][10]

Super Jumping to a teammate after respawning carries the risk of getting splatted upon landing, due to the appearance of a Super Jump indicator. When equipped, Stealth Jump better covers this indicator from long-distance opponents, allowing a .52 Gal user to more safely return to the front lines and more quickly maintain turfing pressure on and zone out the opponent.[9]

A self-explanatory ability, Swim Speed Up specifically benefits a .52 Gal user by allowing them to more quickly retreat from an advancing opponent whenever necessary.