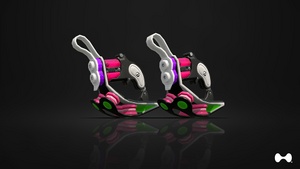 Introduced in Splatoon 2, the Dark Tetra Dualies are a pair of dualies with many unique attributes. These characteristics offer a unique playstyle where a player can switch between skirmisher or slayer roles on the fly, depending on the situation, and be extremely aggressive.

The Dark Tetra Dualies are a traditional skirmisher weapon, played best when distracting, stalling, and harassing the enemy, rather than relying on pure splatting power alone to get picks. However, this weapon still has slaying attributes, allowing it to flex between roles as needed.

Unique to the Dark Tetra Dualies is how it rolls:

Like many other dualies, there are some important techniques to know not exclusive to this weapon:

While not always as reliable as Splat Bombs, Autobombs still provide plenty of utility for the Tetra user:

Since the Dark Tetra Dualies can switch between a skirmisher or a slayer role, a more dedicated slayer weapon, such as a Splattershot or Kensa Splattershot Pro, should be paired with this weapon. The Tetras can distract the enemy while the other slayer goes in for the splat.

While Autobombs technically count as a lethal bomb, they are noticeably easier to avoid. Due to this, avoid having too many weapons with Autobomb in a team composition. The other lethal bombs – particularly either Splat or Suction Bombs – provide its user's team many advantages over another team that has no lethal bombs in its composition:[3]

The specific weaknesses Splashdown has compared to other special weapons reduces its effectiveness if possessed by more than one player in a team:[2]

Ever since its introduction in Version 4.3.0, Bomb Defense Up DX will not only reduce the damage taken from opposing sub and special weapons that are not one-hit-splat but will also reduce the duration of the tracking effects of certain opponent's sub and special weapons, such as Point Sensors and Ink Mines, allowing the user of this ability to evade detection more easily. Because the Dark Tetra Dualies have short range, its user risks damage from both bombs and special weapons and can greatly benefit from reducing the damage taken from them. Just three ability points, or one sub, offer plenty of utility:[4][5]

Main Power Up increases the damage output for the Dark Tetra Dualies.

Quick Super Jump decreases the "charge" time before a Super Jump. Both aggressive and supportive Slosher users will benefit since Quick Super Jump allows them to both return to the front lines more quickly and escape unfavorable situations more easily to preserve special gauge progress.[4][5]

Super Jumping to a teammate after respawning carries the risk of getting splatted upon landing, due to the appearance of a Super Jump indicator. When equipped, Stealth Jump better covers this indicator from long distance opponents, allowing its user to more safely return to the front lines and maintain pressure on the opponent. This ability pairs especially well with Quick Respawn.