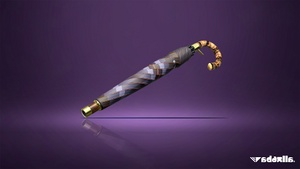 Unlike its vanilla and Kensa variant, the Undercover Sorella Brella has a kit that allows the weapon to deal damage opponents and possibly splat opponents. Splat Bombs help the weapon with splatting and the Baller allows the user to stall a fight until the user is ready.[1]

The Undercover Sorella Brella, with its low DPS and time to splat, decent turfing ability, and shield for survivability, make it a skirmisher and support weapon.

The most reliable way a Undercover Sorella Brella player can engage an opponent is through constant and coordinated use of Splat Bombs:

The Undercover Sorella Brella is great at turfing and building up Baller but relatively weak in splatting opponents. Therefore, it makes a great complement to – and is well complemented by – a slayer, particularly one whose weapon has trouble turfing, such as a Splattershot Pro or a blaster.

Ever since its introduction in Version 4.3.0, Bomb Defense Up DX will not only reduce the damage taken from opposing sub and special weapons that are not one-hit-splat but will also reduce the duration of the tracking effects of certain opponent's sub and special weapons, such as Point Sensors and Ink Mines, allowing the user of this ability to evade detection more easily. Because the Undercover Sorella Brella is a short-ranged weapon, its user can greatly benefit from reducing the damage taken from their opponents' bombs. Just three ability points, or one sub, offer plenty of utility:[7][8]

Any player, including a Undercover Sorella Brella user who avoids direct confrontations, is expected to come in contact with the opponent's ink on various surfaces, which can both be damaging and reduce mobility. Ink Resistance Up not only partially offsets the reduction in mobility but also delays the damage taken from contact with opposing ink.[7][8] Just one sub, or three ability points…

Like other support weapons whose builds include bombs, the Undercover Sorella Brella can greatly benefit from the reduced ink consumption per Splat Bomb used, allowing its user to spam Splat Bombs during either a crucial defensive stand or a late attempt to reclaim the lead.

Special Charge Up accelerates building up the special gauge for Baller, which can be useful for pushing, stopping pushes, or to get out of an unfavorable situation.

Swim Speed Up increases swim speed. Because a Undercover Sorella Brella user has a hard time splatting, Swim Speed Up can help escape the situation or to push in.[12]