For information about the Ink Mine, see Ink Mine. 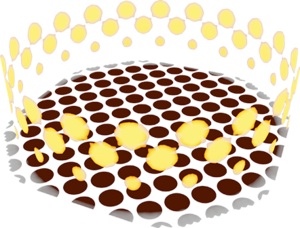 Ink Mines undergo a major overhaul in Splatoon 2. They trade lethal damage for the removal of their ten second time limit, the allowance to have two mines planted at a time, and the ability to tag any surviving opponents with a tracking marker — similar to that from a Point Sensor. As of Version 4.0.0, placing a third Ink Mine will detonate the least recently planted Mine.

Ink Mines cannot be thrown and cannot inflict lethal damage, making them less versatile than most bombs. Therefore, if one member of a team has a kit with Ink Mines, it is advised for one of their teammates to have lethal bombs in their kit. Splat or Suction Bombs provide its user's team many advantages over another team that has no lethal bombs in its composition:[5]

A main weapon's mobility can affect how and where Ink Mines can be placed. Users of lightweight weapons, such as the Inkbrush Nouveau, will have an easier time placing mines onto flank routes than users of heavyweight weapons.

Pay attention to the opposing team's composition to check whether any of its players have Ink Mines equipped. If an opponent has Ink Mines, then take a few proactive measures to avoid getting caught and tracked.