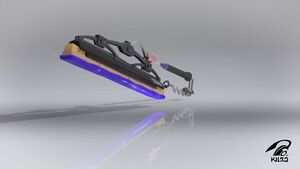 Contrary to its appearance and name, the Splatana Wiper is not a melee weapon. Instead, its playstyle is centered around mid-range poking with its slash attacks and Torpedoes, while having the close-range one hit splat from the charged slash as a backup for opponents who get too close.

The Splatana Wiper's consistent long ranged damage, high mobility, and close ranged one shot fits the role of a skirmisher.

The Splatana Wiper also has some weaknesses.

Torpedoes are a noxious distraction tool, poking at opponents during the neutral phase and being able to combo with the main weapon.

As of version 2.0, the Splatana Wiper now has good painting with uncharged slashes, now with no gaps in between the trails of ink it leaves.

Unless a Splatana Wiper user is on an extended splatting streak, they can expect to get splatted often. When equipped, Comeback grants 10 ability points of six different stackable abilities for twenty seconds after respawning from getting splatted by an opponent:

Ink Saver (Sub) and Swim Speed Up are the most useful for the Splatana Wiper wielder, allowing them to throw Torpedoes more often and more quickly pursue and pressure the opponent upon returning from spawn.

The Splatana Wiper can greatly benefit from both the overall reduced ink consumption and quicker ink recovery, allowing its user to more freely use Torpedoes during either a crucial defensive stand or a late attempt to reclaim the lead.

Ninja Squid reduces detection by opponents while swimming on non-vertical surfaces. It allows its user to swim at full speed undetected and get close to opponents to splat opponents in one hit. It can also be used to escape opponents without getting noticed.

Super Jumping to a teammate after respawning carries the risk of getting splatted upon landing, due to the presence of a Super Jump indicator. When equipped, Stealth Jump better covers this indicator from long distance opponents, allowing its user to more safely return to the front lines and maintain pressure on the opponent.

Quick Super Jump decreases the "charge" time before a Super Jump. All weapons benefit from this ability since Quick Super Jump allows them to both return to the front lines more quickly and escape unfavorable situations more easily to preserve special gauge progress.

Not recommended. Much like using Run Speed Up on a roller, this ability has no effect on the Splatana Wiper's strafing speed while swinging, holding the charged slash, or dashing forward with the charged slash.

First impressions of the Splatana Wiper from competitive players following the Splatoon 3 Splatfest World Premiere were mixed. For example, competitive veteran Sendou considered the weapon to be outclassed,[3] and some players such as Kyo considered the weapon to just be plain bad.[4] On the other hand, some players such as Chara found the weapon to be situational, but fine as is and difficult to learn.[5][6] Further worsening the opinions on the Splatana Wiper were likely because of apparent nerfs to Ultra Stamp hitboxes, which were later confirmed to be bugs that were later patched in 1.2.0.[7]

Due to its lack of competitive usage, its true potential has yet to be seen, though some players like Arashi, a former member of Prophecy and current member of Last Resort, currently uses the weapon in competitive play and may push it forward in the future, along with other players who may pick it up following the 2.0.0 patch.[8]