Applicable gear
Any
Favored by

Quick Respawn is an ability in the Splatoon series.

This ability shortens the player's respawn time after getting splatted. In Splatoon 2, it triggers only if certain conditions are met.

Without this ability, watching the splat cam takes ~6 seconds (after a ~0.5 second splatting animation), followed by a ~2 second respawn animation (total time of ~8.5 seconds). This ability only reduces the splat cam portion of the respawn process. Without this ability, the total respawn times for drowning in water and for falling out-of-bounds are ~7 seconds and ~5.5 seconds respectively.

Quick Respawn tends to be most useful in Ranked Battles. This is due to the importance of getting back to the front lines quickly and the high likelihood of being splatted, since both teams are often gathered in a single area, such as around the Rainmaker or a Splat Zone. Teamwork is a crucial element of Ranked Battles, as well; being able to rejoin one's team just a moment sooner may turn the tide of battle. Stealth Jump paired with this ability can further help the user quickly get back into action after they get splatted.

After getting splatted, Quick Respawn decreases the time spent watching the splat cam or black screen.

The number of ability points for Quick Respawn can be temporarily increased by Last-Ditch Effort.

The effectiveness of Quick Respawn can be temporarily decreased by Respawn Punisher used by any player.

For Quick Respawn to activate, the player must not splat an enemy during the time between their most recent enemy-caused death and their current death. This is different from Splatoon, where Quick Respawn always activated, with no eligibility requirements whatsoever.

A flow chart follows below. It visualizes when a player is eligible for Quick Respawn, and when Quick Respawn activates. 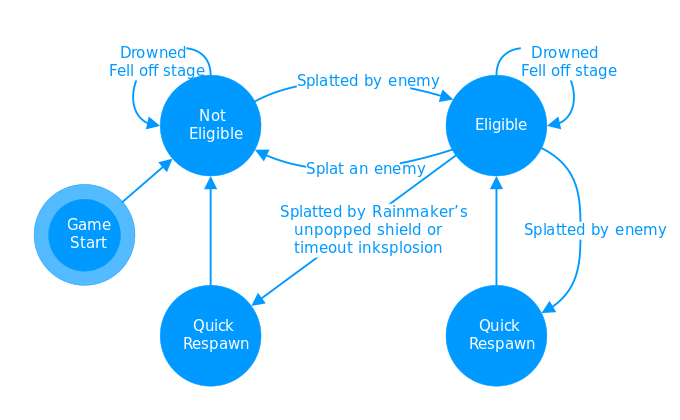