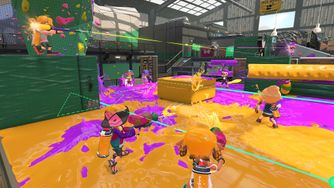 Splat Zones was announced on 23 March 2015 when video game journalists from around the world were invited to a Nintendo event in Seattle, Washington. It was revealed that this mode would not be available at launch, but would instead be released at a later, unspecified, date. Splat Zones, along with the Ranked Battle section of the lobby, was added to the game on 1 June 2015 after enough players reached Level 10.

Clips of Splat Zones in Splatoon 2.

Splat Zones was first confirmed to return for Splatoon 2 on 2 June 2017 in a Nintendo YouTube video.[1]

Splat Zones was confirmed to return for Splatoon 3 on 10 August 2022 in the Splatoon 3 Direct.

Splat Zones plays similarly to the King of the Hill mode in other video games. It revolves around a number of "zones", usually one single zone in the center of a map, which players must attempt to cover in their team's ink. Once a team has covered 70%[2] of a zone in their ink, the zone is "captured" by the team. When all of the zones have been captured by a team, that team is "in control" of the zones and their respective "countdown clock" (or simply, "clock" or "timer") begins to count down from 100. The opposing team must try to capture the zones in the same manner. After five minutes, the team who remains in control of the zone(s) and gets their countdown clock (excluding penalty) lowest wins a match; if a team's clock reaches 0, the game ends instantly as a knockout win for that team.

Controlling the zones causes the team's countdown clock to start. The team will lose control of a zone when 40% in Splatoon or 50% in Splatoon 2[2] of it is covered in the opposing team's ink. Losing control of one or more zones causes the team's countdown clock to stop. If the opposing team then takes control of the zones, a "penalty" is given to the team that was previously in control. Upon retaking all of the zones with a penalty, the penalty clock will tick down first, before the team's main countdown timer resumes.

The total time for a team to win a match after they control the zone without additional penalty or losing control is 60 seconds, given by 100 * (36/60).

Overtime will begin if the losing team (with a higher timer count[a]):

at the moment of the end of regulation. After this point, Overtime will end when:

The penalty assigned to a team is dependent on how long the team has held the zone for in one go. The opposing team's progress is not taken into account. Teams only make progress when holding the zone for a long period of time.

The penalty for losing control of the zone is calculated as follows:

The full formula in spreadsheet format is:

Values are calculated when gaining control from the other team, and not from when a zone is in its neutral state.