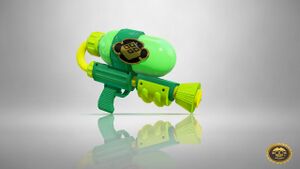 Unlike its Tentatek variant, the Wasabi Splattershot has a cheaper special gauge requirement, allowing the weapon for more frequent Inkstrikes. The Splat Bomb also allows the weapon to be more aggressive, meaning the weapon can be seen slightly better than the Tentatek Splattershot.[1]

The Wasabi Splattershot fires rapidly and turfs very well, but its higher damage and slightly longer range than a Splattershot Jr. makes it a slayer's weapon:

Splat Bombs are a versatile sub weapon that synergize well with the Wasabi Splattershot:

The Inkstrike if deployed properly, can allow a team to push in.

Unless a Wasabi Splattershot user is on an extended splatting streak, they can expect to get splatted often. When equipped, Comeback grants 12 ability points of six different stackable abilities for twenty seconds after respawning from getting splatted by an opponent:

All of these abilities benefit a Wasabi Splattershot, making it more ink efficient, move faster, and pairs well with the weapon's middle special depletion to obtain Inkstrike faster on respawn.