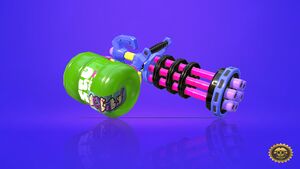 The Heavy Splatling Remix shares the similar strengths as its vanilla variant, but instead offers a kit that allows the user to play more supportive, spreading turf and being able to spam Booyah Bombs more efficiently than other weapons such as the Aerospray PG.

The Heavy Splatling Remix is a long ranged anchor's weapon, similar to chargers, albeit not as long ranged:

The Heavy Splatling Remix has great range and powerful damage but is lacks mobility while moving or firing and has trouble leading pushes and pursuing opponents. Be sure to include some mobile, shorter-ranged weapons in the team composition. Otherwise, a team with too many longer-ranged weapons will have major drawbacks:[5]

Point Sensors lack certain advantages offered by lethal bombs — particularly either Splat or Suction Bombs, which provide their user's team a couple advantages over another team that has no lethal bombs in its composition:[5]

Ever since its introduction in Version 4.3.0, Bomb Defense Up DX will not only reduce the damage taken from opposing sub and special weapons that are not one-hit-splat but will also reduce the duration of the tracking effects of certain opponent's sub and special weapons, such as Point Sensors and Ink Mines, allowing the user of this ability to evade detection more easily. Since the Ballpoint Splatling Nouveau is prone to being attacked by bombs and Tenta Missiles due to it being an anchor, having this ability is great for improving its survivability - especially considering how slow it is in its second mode. Just three ability points, or one sub, offer plenty of utility:[6][7]

A Heavy Splatling Remix user can expect to come in contact with the opponent's ink on various surfaces, which can both be damaging and reduce mobility. Ink Resistance Up not only partially offsets the reduction in mobility but also delays the damage taken from contact with opposing ink.

The Heavy Splatling Remix benefits most from the second buff, allowing it to consistently break Ink Armor in one hit.

Quick Super Jump decreases both the "charge" time before and the travel time of a Super Jump, allowing its user to escape more quickly. A Heavy Splatling Remix user is usually vulnerable in close quarters and would also have an incentive to maintain valuable special gauge progress for their Booyah Bomb.

Special Charge Up accelerates building up the special gauge for Booyah Bomb, which can prove invaluable for either capturing or holding the zone or either stopping or slowing the Tower.

Swim Speed Up increases swim speed. Because a Heavy Splatling Remix user has a hard time splatting flankers, Swim Speed Up can help escape the situation and get to a safe spot to Super Jump away.