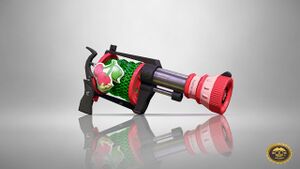 The Cherry H-3 Nozzlenose in Splatoon is considered one of the best weapons in the game. While Splash Wall may not be the best, the weapon's cheap Bubbler and losing only 40% of the Special gauge when getting splatted makes the weapon very strong.[1]

The Cherry H-3 Nozzlenose is also a very capable support weapon because of its range and turf coverage:

As a burst-fire shooter, the Cherry H-3 Nozzlenose requires a higher level of skill than an automatic shooter to be effective:

The primary weaknesses of the Cherry H-3 Nozzlenose are its poor ink efficiency, slow mobility while firing, and long lag between firing bursts:

The Cherry H-3 Nozzlenose has good range and thorough turfing but is not very mobile while firing and is vulnerable up close due to its long lag in between firing bursts. Be sure to include some shorter-ranged weapons in the team composition. Otherwise, a team with too many longer-ranged weapons will have some glaring drawbacks:

Therefore, the Cherry H-3 Nozzlenose makes a good complement to – and is well complemented by – a a more rapid firing slayer's or support weapon, such as a Splattershot, an N-ZAP '85, or a Splash-o-matic.

While Splash Walls can protect a team, they cannot inflict lethal damage, making them less versatile than most bombs. Therefore, it is advised for at least one teammate of a Cherry H-3 Nozzlenose user to have lethal bombs in their kit. Splat or Suction Bombs provide its user's team many advantages over another team that has no lethal bombs in its composition:

Damage Up increases the damage of the main and sub weapon. Damage Up can help with making the Cherry H-3 Nozzlenose close to a two-hit splat if the opponent has been damaged by ink. Damage Up can also negate Defense Up to guarantee a three-hit splat.

While the weapon inks well, the user is expected to come into contact with enemy ink often. Ink Resistance Up helps with mobility while touching enemy ink, and the damage taken when stepping on it.

Quick respawn allows this weapon to transition to more of a slayer weapon (the least mobile in the game). This will allow more splats with less penalty on death allowing for aggressive pushing for key positions.

As bubbler is extremely relevant to the survival and protection for the cherry, some special charge should be considered for this weapon. 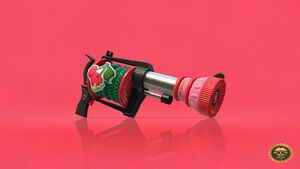 Unlike in Splatoon, the Cherry H-3 Nozzlenose is not used as often. While the weapon still has its strengths and a cheap Bubble Blower, the weapon takes too long to burst bubbles and does not have a bomb to help in popping them, making the weapon worse than the other variants.

In Splatoon 2 the weapon has a few differences compared to in Splatoon:

Bubble Blower is great for either initiating a push into contested territory or repelling the opponents' push. However, it is neither a very reliable means of turfing territory – such as a Splat Zone – nor always a dependable means to splat opponents — particularly ones with longer-ranged weapons. Therefore, it would be redundant to have two Bubble Blower users in a team composition:[7]

A Cherry H-3 Nozzlenose user can expect to come in contact with the opponent's ink on various surfaces, which can both be damaging and reduce mobility - especially in between shots. Ink Resistance Up not only partially offsets the reduction in mobility but also delays the damage taken from contact with opposing ink.[10][11]