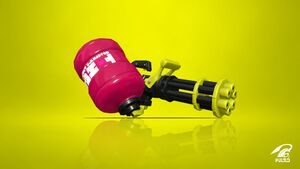 The Heavy Splatling is a long ranged anchor's weapon, similar to chargers, albeit not as long ranged:

The Sting Ray excels on stages that are long, narrow, closed, and relatively flat, especially Port Mackerel and Walleye Warehouse, particularly in Tower Control and Rainmaker. Special Charge Up and Tenacity can help hasten the building of the special gauge.

Special Charge Up accelerates building up the special gauge for Sting Ray, which can prove invaluable for stopping or slowing the Tower or Rainmaker.