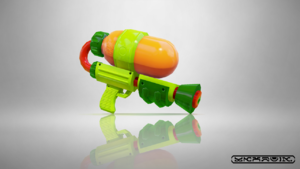 The Splattershot is a slayer that uses its rapid fire to splat opponents, though it is also effective at turfing. In competitive, the vanilla Splattershot saw use mainly as a Burst Bomb spammer, poking at the opponents and even their anchors while using Bomb Range Up.[1] This is due to its other two variants having better kits for a slayer role, and the Refurbished Mini Splatling, which shares the same kit as this weapon, lacking gear space to perform this role.[1]

Compared to its Splatoon 2 appearance, the Splattershot has some minor tweaks that slightly hurt its performance, though the weapon itself is still solid:

Burst Bombs function exactly the same as they do in Splatoon 2, except for Ink Saver (Sub) having better stacking on them in this game.

Like most of its variants, the Bomb Rush is designed to either help push into a highly contested area or help repel the opponent's push:

Bomb Range Up is the bread and butter of a vanilla Splattershot build, allowing it to perform its role as a support with long-range Burst Bombs.[1] This ability also affects Burst Bombs thrown from a Bomb Rush.

Damage Up increases damage of the main, sub, and special weapons. Damage Up can increase damage to allow the user to combo with their Burst Bombs more often and to increase the Burst Bombs in their Bomb Rush, making the special more lethal.

A pure of this ability will allow its user to throw three Burst Bombs from a full ink tank.

Quick Respawn always shortens the time taken to respawn, allow a Splattershot user to be aggressive without much consequences. 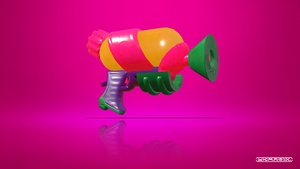 The Splattershot fires rapidly and turfs very well, but its higher damage and slightly longer range than a Splattershot Jr. makes it a slayer weapon:

While the Splattershot's Burst Bombs are versatile, they lack certain advantages offered by lethal bombs — particularly either Splat or Suction Bombs, which provide their user's team a couple advantages over another team that has no lethal bombs in its composition:[3]

The specific weaknesses Splashdown has compared to other special weapons reduces its effectiveness if possessed by more than one player in a team:[3]

Ever since its introduction in Version 4.3.0, Bomb Defense Up DX will not only reduce the damage taken from opposing sub and special weapons that are not one-hit-splat but will also reduce the duration of the tracking effects of certain opponent's sub and special weapons, such as Point Sensors and Ink Mines, allowing the user of this ability to evade detection more easily. Because the Splattershot works optimally at short range, its user risks damage from both bombs and special weapons and can greatly benefit from reducing the damage taken from them. Just three ability points, or one sub, offer plenty of utility:[15][16]

As a slayer, a Splattershot user has to risk getting splatted often. When equipped, Comeback grants 10 ability points of six different stackable abilities for twenty seconds after respawning from getting splatted by an opponent:

Ink Saver (Sub) and Swim Speed Up are particularly useful for the Splattershot, allowing its user to consume less ink and maintain pressure on the opponent upon returning from spawn.[15]

A Splattershot user can expect to come in contact with the opponent's ink on various surfaces, which can both be damaging and reduce mobility. Ink Resistance Up not only partially offsets the reduction in mobility but also delays the damage taken from contact with opposing ink.[15][16]

A self-explanatory ability, Swim Speed Up enables an already mobile Splattershot user to more rapidly close the distance towards an opponent, more quickly respond to an opponents' push, or even escape unfavorable situations. 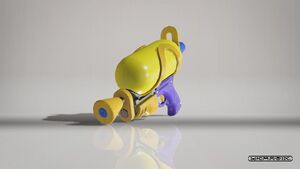 The iconic Splattershot once again returns in Splatoon 3 with a new design, yet its role remains the same, being a quick-firing slayer that plays aggressive and gets splats.

The Splattershot maintains the same stats it has in Splatoon 2, being a strong all-rounder with solid turfing and splatting capabilities.

The Splattershot was projected to be a strong weapon, even before the game's release.[19] It has an aggressive kit that echoes that of the ubiquitous Tentatek Splattershot in the first Splatoon, while also presumably carrying over the many buffs it received in Splatoon 2. At first it seemed to be a correct prediction from the competitive community and the Splattershot remained a popular pick in tournaments; some players, such as Chara, considered the Splattershot to be the best weapon in the game at one point.[20] Trizooka was considered one of the best specials in the game at the time due to being good for both displacement and splatting opponents, even hitting opponents hiding behind cover if angled correctly.

As the meta of the Drizzle Season 2022 progressed however, the Splattershot began falling off in favor of the Splash-o-matic. Some players considered Trizooka to be more unreliable and harder to use than the Splash-o-matic's Crab Tank, which applies pressure for a longer amount of time.[21]