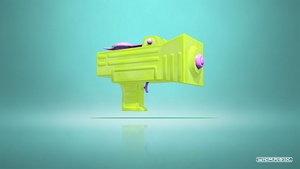 The Splattershot Jr., the first available weapon in the game, is a rapid firing weapon that provides turfing and (with its sub and special weapons) support but lacks accuracy and range.[2] Since Version 3.2.0, it now has a larger ink tank with 10% more capacity, further improving its already excellent ink efficiency.

The Splattershot Jr. is capable of various tasks needed to win battles, but its specific traits make it best suited for a support role:

The most reliable way a Splattershot Jr. player can engage an opponent is through constant and coordinated use of Splat Bombs:

Ink Armor protects its user and all of their active teammates, reducing their chances of getting splatted and allowing them to either initiate a push (e.g., to recapture a Splat Zone) or maintain one, such as while locking out the opponent.

The Splattershot Jr. is great at turfing, Splat Bomb support, and building up Ink Armor but poor in splatting and lacking in range. Therefore, its user – compared to users of other support weapons, such as an N-ZAP '85 or a Kensa Undercover Brella – will depend more heavily on their teammates to contest turf and splat opponents. Therefore, a team whose composition includes a Splattershot Jr. user should have at least two capable aggressive players (either two slayers or a slayer and a skirmisher) and at least one user of a medium- to long-ranged weapon.

Multiple Ink Armors used by the same team do not stack. Therefore, it would be redundant for a team to have more than two Ink Armor users.[15]

Ever since its introduction in Version 4.3.0, Bomb Defense Up DX will not only reduce the damage taken from opposing sub and special weapons that are not one-hit-splat but will also reduce the duration of the tracking effects of certain opponent's sub and special weapons, such as Point Sensors and Ink Mines, allowing the user of this ability to evade detection more easily. This is a useful ability for almost any player, even a Splattershot Jr. user, who does not directly engage their opponents. Just one sub, or three ability points, offers plenty of utility:[16][17]

Any player, including a Splattershot Jr. user who avoids direct confrontations, is expected to come in contact with the opponent's ink on various surfaces, which can both be damaging and reduce mobility. Ink Resistance Up not only partially offsets the reduction in mobility but also delays the damage taken from contact with opposing ink.[16][17]

Ink Saver (Sub) allows more frequent use of Splat Bombs and saves ink for the main weapon after each Splat Bomb used. Because a Splattershot Jr. user depends on their sub weapon more than most other weapon users do on both offense and defense, having the ability to more frequently use Splat Bombs is invaluable.[16]

Like other support weapons whose builds include bombs, the Splattershot Jr. can greatly benefit from the reduced ink consumption per Splat Bomb used, allowing its user to spam Splat Bombs during either a crucial defensive stand or a late attempt to reclaim the lead. Last-Ditch Effort reduces the amount of Ink Saver (Sub) required to reach the 23 ability points needed to throw two consecutive Splat Bombs with a full ink tank, depending on the opponents' remaining countdown:[16]

Because the Splattershot Jr.'s damage always remains between 14-28 HP (when taking falloff damage into account), Object Shredder provides its user a valuable damage boost against opponents using either Ink Armor or Baller. Its only drawback is that it occupies an entire main ability, reducing the amount of ability points allowed for other potentially important gear abilities, such as Ink Saver (Sub) and Special Charge Up. Fortunately, Last-Ditch Effort can be combined with Object Shredder to reduce dependence on Ink Saver (Sub).

Quick Super Jump decreases both the "charge" time before and the travel time of a Super Jump. A Splattershot Jr. player will be outmatched by most opponents, and Quick Super Jump can help them escape unfavorable situations more quickly, which avoids getting splatted, maintains a presence on the stage, and preserves precious special gauge progress.[16][17]

The Splattershot Jr. is the first weapon available in Splatoon 3, continuing a tradition starting back in the original Splatoon. Like in the previous two entries of the Splatoon series, it has a rapid firing rate, a wide shot spread to provide turfing; a powerful sub weapon, and a protective special weapon. It also retains the larger ink tank it received in Splatoon 2 Version 3.2.0, though it looks the same as a regular ink tank.[20] However, it lacks range and accuracy, making it poor at splatting opponents.

The inherent traits of the Splattershot Jr. make it best suited for a support role:

The Splattershot Jr. has two weaknesses that reduce its user's effectiveness in combat:

The Splat Bomb is a powerful and versatile weapon that boosts a Splattershot Jr. user's survivability and combat capability:

If placed carefully, the Big Bubbler can protect you and your team by blocking incoming attacks: