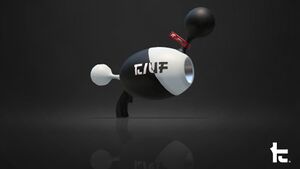 Similar to its Vanilla and Neo variant, the Kensa Luna Blaster is a Blaster having a faster fire rate and large blast radius. The kit, Fizzy Bomb and Ink Storm, allows the user to play more supportively, allowing it to turf more than the other variants.

The Kensa Luna Blaster, like its Vanilla and Neo variants, is a one-shot Blaster that has a fast fire rate and a large blast size.

Fizzy Bombs can provide great coverage and pressure with splash hits, even in stages and areas that are more open:

The Ink Storm is an area of effect (AoE) special weapon that can alter the battle if activated in the right location and direction:

Ink Storm is intended for either contesting territory, such as Splat Zones, or stalling opponents' pushes but is not as reliable at splatting opponents who actively avoid the Storm. Therefore, it is advised to have other special weapons available to complement Ink Storm, as having too many users of any combination of Ink Storm and Bomb Launcher (no more than two) in a team composition will limit a team's arsenal of weapons:[2]

An opponent's Fizzy Bomb is often a hindrance, but it can be worked around:

When facing an opposing Ink Storm, assess where is a safe place to either reroute an attack or reposition on defense:

When facing a team who possesses both Ink Storm and main weapons whose damage is increased with Main Power Up, pay extra attention to where the Main Power Up-boosted opponents are at whenever they launch their Ink Storm.

Due to both its relatively high ink consumption and Fizzy Bombs, the Kensa Luna Blaster can greatly benefit from the reduced ink consumption of both the main and sub weapon, reducing the chance that its user runs out of ink during either a crucial defensive stand or a late attempt to reclaim the lead.[4]

Ever since its introduction in Version 4.3.0, Bomb Defense Up DX will not only reduce the damage taken from opposing sub and special weapons that are not one-hit-splat but will also reduce the duration of the tracking effects of certain opponent's sub and special weapons, such as Point Sensors and Ink Mines, allowing the user of this ability to evade detection more easily. Because the Kensa Luna Blaster is a powerful short-ranged weapon, its user can greatly benefit from reducing the damage taken from their opponents' bombs. Just three ability points, or one sub, offer plenty of utility:[4][5]

A Kensa Luna Blaster user is expected to come in contact with the opponent's ink on various surfaces, which can both be damaging and reduce mobility. Ink Resistance Up not only partially offsets the reduction in mobility but also delays the damage taken from contact with opposing ink.[4][5]