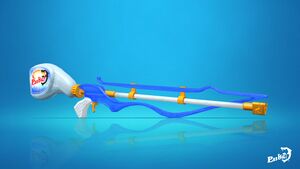 The Classic Squiffer is a charger that, compared to the Splat Charger, has a shorter charge time and more ink efficiency at the cost of some range and damage. Compared to its other variants, it has a kit – including Ink Armor with the lowest special gauge requirement in all of Splatoon 2 – that enables its user to also play a supportive role on their team.[3][4][5]

While the Squiffer series can flex between slayer's and anchor's weapons, the Classic Squiffer comes with a supportive kit:

The Classic Squiffer has a few weaknesses:

Ink Armor enables its user's team to either push into opposing turf more aggressively or more staunchly hold its ground, such as while locking out the opponent:

The Classic Squiffer's range and one-shot splat potential allow its user to maintain spatial control and pressure without having to thoroughly ink large swaths of turf. However, its requirement to charge before firing leaves its user vulnerable at close range. Therefore, it is generally advised not to add more than one other long-ranged weapon to a team composition for a few reasons:[9]

While quicker and more efficient at turfing than most other chargers, the Classic Squiffer still turfs less efficiently than many typical slayer weapons, such as the Splash-o-matic and the Splattershot. A team whose composition lacks sufficient turfing ability will struggle to maintain map control, which can make games seem like a constant uphill battle:[9]

It is also an undeniable fact that the Classic Squiffer lacks bombs — particularly either Splat or Suction Bombs. Lethal bombs provide their user's team a couple advantages over another team that has no lethal bombs in its composition:[9]

Given the Classic Squiffer's unique set of strengths and weaknesses, its user will benefit from having teammates with mobile, short-ranged weapons; quick-turfing weapons; and lethal bombs:[10]

While Ink Armor is a valuable global special weapon, having more than one reduces the number of unique special weapons your team can have. Plus, multiple Ink Armors used by the same team do not stack. Therefore, it would be redundant for a team to have more than two Ink Armor users.[9]

While special weapons used in combination are beneficial in general, a user of either Inkjet or Ultra Stamp would particularly benefit from the added survivability provided by Ink Armor:

A skilled, opposing Classic Squiffer user is a threat from distance, beneath a ledge, and around a corner. Their ability to support their team with Ink Armor further increases their value to their team. Splatting them will temporarily remove their ranged pressure and Ink Armor for their team.

Ever since its introduction in Version 4.3.0, Bomb Defense Up DX will not only reduce the damage taken from opposing sub and special weapons that are not one-hit-splat but will also reduce the duration of the tracking effects of certain opponent's sub and special weapons, such as Point Sensors and Ink Mines, allowing the user of this ability to evade detection more easily. While this is a useful ability for any player, a Classic Squiffer user would want it to reduce the splash damage taken from bombs, Tenta Missiles, and Inkjet shots. Just three ability points, or one sub, offer a great amount of utility:[11][13][14][15]

Every player, especially a Classic Squiffer user who swims while storing a charge, is expected to come in contact with the opponent's ink on various surfaces, which can both be damaging and reduce mobility. Ink Resistance Up not only partially offsets the reduction in mobility but also delays the damage taken from contact with opposing ink:[11][14]

Main Power Up enhances the performance of the Classic Squiffer in two areas:[8][11][13]

Each of these benefits respectively improve the main weapon's capability to snipe further targets and turf quickly. Of the 284 Classic Squiffer builds submitted to Sendou.ink, over 45% of them have between 19 and 32 ability points of Main Power Up:[18]

Quick Super Jump decreases both the "charge" time before and the travel time of a Super Jump, helping its user escape unfavorable situations more quickly. A Classic Squiffer user tends to be vulnerable in close-quarters combat and would prefer to quickly retreat and preserve precious special gauge progress for Ink Armor, which can prevent a disadvantageous situation from becoming a losing one.[11][14]

Special Charge Up accelerates building up the special gauge for Ink Armor, effectively reducing the turfing required. While a Classic Squiffer user has the lowest special gauge requirement for Ink Armor, this is partially offset by their reduced ability to turf when compared to shooters, such as the N-ZAP '85.[11]

A universally valuable ability for almost any weapon, Swim Speed Up is particularly useful for a Classic Squiffer user, who often swims while storing a charged shot. Swimming faster enables one to both more easily close the distance between themselves and a longer-ranged opponent and maintain enough distance between themselves and a shorter-ranged opponent.[11]

The Classic Squiffer at the start of the game was seen not as viable due to its range. While it had what would be considered a good kit, its range made the weapon too risky to play than other convenient chargers with range. The Classic Squiffer also did not have its notable strengths such as in-air charging or potential range increase with Main Power Up, which left the weapon less mobile and around the same mobility as other chargers. The Classic Squiffer was left at the bottom end of tier lists for most of the start of the game. It was even seen by competitive player Sorin as one of the worst weapons in the game because of its range and its kit which at the time was seen as weak. [20][21][22]

Version 4.6.0 had the same thoughts as the versions before but now it would be considered the better kit than the other variants.[23]Around version 5.0.0 is when thoughts on the weapon changed. The Classic Squiffer would be put on high tiers by competitive player Chara. Its low points for Ink Armor allows the weapon to spam Ink Armor just as much as other support weapons such as the Splattershot Jr.. Main Power Up also increases its ink coverage which aids the user to get more Ink Armors. Its mobility also allows the weapon to move around quickly and splat opponents, especially due to the fact that it can charge in the air at the same speed as on the ground. [24]. In the beginning part of version 5.5.0, it was considered the weakest kit among the Squiffers,[25] but now it has the best kit among the Squiffers because of it being able to substitute for other Armor weapons and still being as good at spamming Armor. [26]