For information on the Autobomb, see Autobomb. 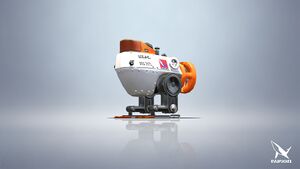 The Autobomb is a unique lethal bomb paired mostly with short to mid-range weapons. It chases after opponents and explodes when near, or until enough time has passed.

The biggest difference when compared to the other bombs is the Autobomb's tracking capabilities, making them useful to reveal sharking opponents.

That being said, Autobombs can still be used in a similar manner to Splat Bombs, although not as reliably.

While Autobombs technically count as a lethal bomb, they are not as reliable as conventional bombs. Due to this, be sure to still include weapons whose kits have other lethal bombs — particularly either Splat or Suction Bombs, which provide its user's team many advantages over another team that has no lethal bombs in its composition:[5]