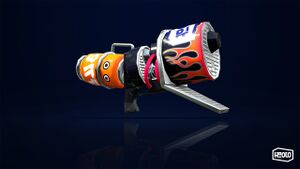 Quick Respawn shortens respawn time after getting splatted (under specific conditions). Like other slayer's weapons, the Custom Blaster benefits from abilities that promote aggressive play, such as Quick Respawn and Stealth Jump.

Stealth Jump hides its user's Super Jump landing marker from opponents (and allies) who are not too close to it — about three tile lengths in the middle of Inkblot Art Academy.[4] This encourages its user to Super Jump back to the frontlines more often.