Shellendorf Institute is a multiplayer stage in Splatoon 2. It takes place inside a history museum. A large glass roof stretches over the stage's center, giving players high ground but limiting their navigation options when they stand on it.

Shellendorf Institute is a suspended upper floor of a large museum with many different displays of historical artifacts. The distinguishing feature of the stage is the two-layered dynamic of the inkable lower floor and the glass ceiling suspended above. The upper layer can only be accessed from the left path immediately in front of the spawn point, the one inkable display on each team's right side, or the Inkrail right before entering the central plaza. Going to the left path from the spawn gives a vantage point over enemy coming in from the narrow hallways in that direction, while the glass ceiling makes up the rest of the upper ground. The center area dips down to a long open hallway with the only obstacle being a stone sarcophagus at center stage.

The Splat Zone of the stage is located horizontally at the center of the stage and spans much of the center area, with the sides on the inclining slopes. The stage received a significant change during this mode, most notably the glass ceiling being separated, so teams are no longer able to access the opposing team's side from the upper route. Several blocks have been added to the narrow hallways, however. The addition of these blocks gives a potential access point for the opposing team to climb into the upper area of their enemy. An Inkrail is added to the left of spawn to get to the Glass ceiling quicker.

The layout of the stage is adjusted with the glass ceiling being separated and a block added in the tower's path which makes pushing more difficult. The Tower is located at the center of the stage in place of the stone sarcophagus. The Tower weaves around a few blocks added to the center stage, traveling left into the side area, before rising above a wooden block, added to wall off the side area. It then descends from the other side and makes a right turn, reaching its destination where the opposing team would drop off into the battlefield.

The Rainmaker is located center stage on top of the stone sarcophagus. The goal is located in front of the enemy base, one level up from the lower area. When approaching from the left, ramps have been added which allow players to reach the upper floors and some uninkable stairs have also been added immediately in front of the goal. There are three ways to reach the goal: to the left, up the ramps, which leaves them right above the goal; straight to the goal, up the uninkable stairs; or the upper route which leads the player to the right and directly to the platform where the goal is (The upper route can be accessed by climbing up the walls or taking an Inkrail left from the starting position of the Rainmaker).

The baskets are located at the far ends of the central area in the center between the opposing team's upper paths. While players can access the goals from above, scoring from the glass roof is very precise, meaning that players will likely have to jump down to the lower level to throw clams into the basket. Blocks have been added to allow more options to get onto the glass ceiling. 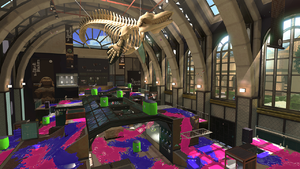 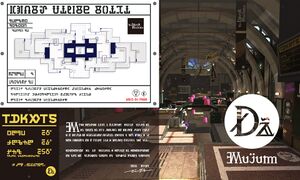 On 22 July 2019, an announcement was posted on the official Japanese Splatoon Twitter account stating that from 29 to 31 July 2019, Shellendorf Institute would be "closed for renovations", similar to the announcements made for Starfish Mainstage in Version 4.0.0, The Reef in Version 4.2.0, and Blackbelly Skatepark in 4.3.0.[1] The announcement included a blueprint of the stage with the planned changes drawn over it. The changes were released in Version 5.0.0 on 31 July 2019.