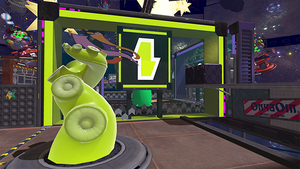 Sweet Valley Tentacles is a multiplayer stage in Splatoon 2. It was the twelfth variation of Shifty Station, and first appeared in the Squid vs. Octopus Splatfest. It returned in the Chaos vs. Order Splatfest. As of version 5.0.0, it is exclusively available in Private Battles. It features large tentacles, which can be splatted to open up gates around the stage.

Each team's spawn point is on a raised platform with a lower area in front and to the right and a walkway going off to the left. Past the lower area is a wall numbered 3 on the left, a ramp to a raised platform in the middle, and a tall, uninkable wall to the right. Beyond these is a large courtyard divided by both teams' number 1 walls and an S-shaped inkable platform between them. On each team's side, the number 1 tentacle is on the right, near the S-shaped platform. Further to the right of each team's side is a small pit hazard and a blocked-off area containing the team's number 2 tentacle. To the left of the team's side of the center is their number 2 wall, and beyond it a small enclosed area. This area contains the team's number 3 tentacle and can be reached by following the left walkway from the team's spawn. The number 2 wall is flanked by a raised platform with sponges at each end, allowing friendly team members to go around the wall without opening it.

The background of this layout features drinking jars with straws filled with a clear liquid. The background also has fireworks going off, some of them in the shape of the squid and octopus icons from the game can be seen in the sky, colored to match the teams currently playing.

Players can splat their enemy team's corresponding numbered tentacles (denoted by the Inkling numbers 1, 2 and 3). Doing so will lower a barrier with the same number, giving access to other areas, displaying a message and playing the "objective captured" or "objective lost" sound effect from Ranked Battles. Each tentacle is connected to a certain barrier and they do not heal damage or regenerate once splatted. There is a lit path on the floor leading from each tentacle to the gate it opens, and once the tentacle is splatted, the lights turn off as the gate opens.

The tentacles do not need to be splatted in any particular order, as number 2 is accessible from the start, and number 3, while hidden behind the number 2 gate, can still be accessed using long-ranged weapons and ones that provide more mobility, such as the Inkjet or Sting Ray; or by standing on a sponge and having it be expanded by an enemy team member.

The first tentacle will suffer 600 damage before being splatted, the second 3000, and the third 2000. Certain weapons do more damage to the tentacles, with the game applying the same damage multipliers as when attacking tentacles in Octo Expansion boss fights. The tentacles are unaffected by Object Shredder, so no additional damage is dealt.

Sweet Valley Tentacles is named after the Sweet Valley High books by Francine Pascal, who presided over a team of ghostwriters. The name references the large tentacles found around the stage.