Blackbelly Skatepark is a multiplayer stage in Splatoon and Splatoon 2.

Blackbelly Skatepark is a stage based around a skate park. It includes a curved landscape with multiple raised locations.

Blackbelly Skatepark features two inversely symmetrical skateparks with large ramps and hills. It also includes more wide-open areas. There are numerous ways to attack the center of the map, as well as to attack the bases. In the center, there is a tall tower. It is a large, plateaued structure that can only be accessed by climbing vertical paths of ink. It is an effective but vulnerable place to control the center area of the stage. Small balconies are positioned on its sides. Right-angled alleys are located to the right of each team's spawn point and lead towards the center of the map. They each contain a high platform which can be useful for chargers trying to take over the central tower. There are no hazards in Blackbelly Skatepark.

In Splatoon 2, the spawn point area is not accessible to the enemy team, now being on a fairly large raised platform area.

The Splat Zones in Blackbelly Skatepark are relatively small and located in opposite corners from each other in the middle of the map, both touching the central tower. The spawn points are moved down a layer and the layer which the spawn points were in Turf War is removed. Inkrails are also added to get to the center quicker.

The Tower in Blackbelly Skatepark is located at the top of the central tower. The goals are located in the right alleys, going past the two small walls. When it is ridden, the Tower moves to the riding team's left. It then descends downward and proceeds to go through the opposing team's right alley, all the way to the goal. The spawn points are moved down a layer and the layer which the spawn points were in Turf War is removed. Inkrails are also added to get to the center and the tower quicker.

The Rainmaker in Blackbelly Skatepark is located at the top of the central tower. The goals are located directly to the left, just off of the spawn point. Just past those goals, right by the central tower, there are black uninkable boxes. There are also small boxes added to the central tower so players can hit the Rainmaker without being pushed down from the expanding shield.

In Splatoon 2, the central tower is significantly shorter with the Rainmaker on it. The goal is on the layer below the spawn point and a block has been added to jump to the layer below the spawn point. Going to the right also allows a way to the pedestal. While to the left also provides a way to the pedestal. Rainmaker is the only ranked mode in which this stage retains most of the terrain of Turf War.

The basket is located at the right side from the spawn, in front of the hills. There are no bumps near it. The spawn points are moved down a layer and the layer which the spawn points were in Turf War is removed. An Inkrail has been added to get to the basket quicker. The layout looks the same as in Tower Control. 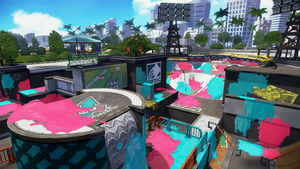 Blackbelly Skatepark underwent a series of changes between its development period and release.

Blackbelly Skatepark was released with the launch of Splatoon.

Blackbelly Skatepark was available in the following Splatfests in Splatoon: 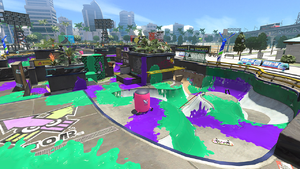 Blackbelly Skatepark returns in Splatoon 2, initially appearing nearly identical to its appearance in Splatoon, with a few notable changes. The platform the spawn point is located on no longer slopes downwards to the area ahead of it, and the platform has been stretched backwards to allow for more room. The square platform in front of the spawn now also extends forwards, allowing for an additional side route to the center. A small bump on the right side of the stage also has been removed. As a result of these changes, the stage is now larger and more open than its appearance in the first game. 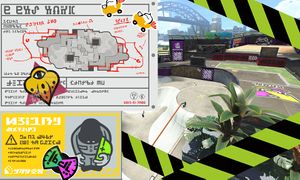 Bバスパーク B Basu Pāku is derived from 'B. bass park'. 'Black bass' is a fish and 'skatepark' is a park for skateboarding.