Urchin Underpass is a multiplayer stage in Splatoon.

Urchin Underpass consists of two large L-shaped areas of land that are joined together by a rectangular piece of land between them. It takes place below a highway. 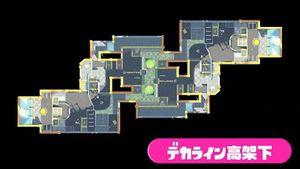 Urchin Underpass layout similar to the updated version, but not entirely complete.

The spawn point of Urchin Underpass is fairly complicated despite being a usually neglected area. It is a large, enclosed area with several slopes descending to the lower floor, as well as grates leading away from it. The area around the spawn is a high, wide level with railings surrounding the edges, and the only way up is through the winding ramp situated at the corner in front of the spawn point. The spawn point area is accessible to the enemy team. The spiral ramp also has a walkway that leads to an alternate entrance into the main arena.

Dropping down to the lower floor, the path toward the center of the map splits. One is an elevated path partially protected by railings and hard to reach for the enemy team, while the other is behind a grated wall that squids and ink can easily pass through, but solid objects like bombs cannot. A pillar juts out where the split paths converge and is tall enough that only players from the upper level can jump to. Beyond the pillar is a steep ramp leading to a side area that functions as the team's battlements. There are large patches of uninkable ground as well as two openings that make for popular sniper outposts. The opening closer toward the middle has an inkable wall so that anyone from below can swim up to it.

A large multilayered hill marks the entrance to the center, while a narrow alley runs beside it. At the end of the alley is a small flat square, and beyond that is the front lines where shots are traded, which has a ramp for daring jumps into enemy territory, a wall for cover and two ramps leading down into the gorge between either team's concrete platforms. The platform walls are all inkable, allowing for surprise attacks from within the gorge. Two trees are placed at either end of the gorge for cover. There are no hazards in this stage. 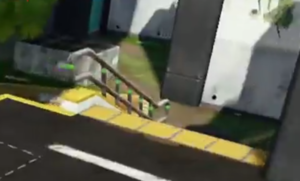 The corner of the Splat Zone, showing different terrain.

The Splat Zone in Urchin Underpass is located at the very center of the map. It is the smallest singular Splat Zone in Splatoon, so gaining and staying in control requires lots of attention to it. Boxes have been added near both ends of the Splat Zone to protect from enemy fire and a vantage point to attack the Splat Zone.

In Tower Control, the Tower starts in the center plaza. It moves straight back towards the enemy territory and climbs up, then moves to the rider's left, climbs back down, and reaches the goal.

The Rainmaker in Urchin Underpass is located in the center of the stage, just below the two ramps in the center. The goal is at the end of the small strip of land with four stripes in front of the opposing team's base. Two stacks of blocks have been added to help both teams get to the center of the map faster. 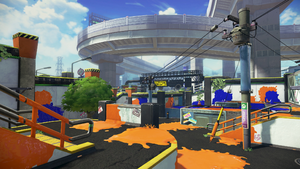 Urchin Underpass underwent a series of changes between its development period and release. It is also used in Octo Valley mission #21, Unwelcome Flying Object, as well as the Battle Dojo in the released version of it.

An early version of Splatoon featuring rabbits on an early Urchin Underpass. Note the almost-complete Splattershot.

The earliest designed version of Urchin Underpass has been seen in a screenshot from when the game still used rabbits as the design for the player characters. The center of the stage is very similar to the E3 and release versions of Urchin Underpass. 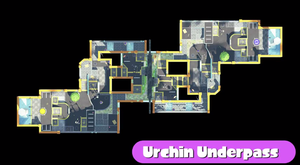 A map of the old Urchin Underpass.

In this version, the center of the stage is almost the same as in the E3 version, but each side's base was changed completely, from removing grates and high platforms to ramps and high advantage points.

There are two alleys located near the central plaza. They are long, narrow, hidden-away strips of turf that are difficult to access which have two glass panels.

It is still possible to play the pre-update Urchin Underpass in Battle Dojo. 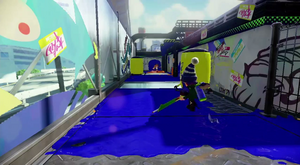 One of the "secret" alleys. 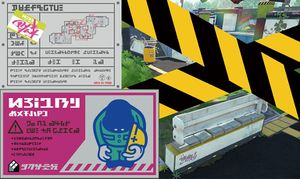 The image released by the Squid Research Lab announcing changes to Urchin Underpass.

On 27 July 2015, the official Splatoon Tumblr announced that Urchin Underpass would be undergoing maintenance between 2 and 5 August 2015. They released an image showing the original map scribbled on, allowing fans to see what about the stage would be changed. Many features were altered, including:

Urchin Underpass was available in the following Splatfests in Splatoon. 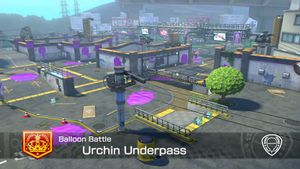 There is a battle course in Mario Kart 8 Deluxe based on Urchin Underpass. This version of the stage features much more open areas for karts to drive and purple and green ink on the ground to slow down the karts. In Coin Runners mode, coins are replaced by the Cash from Inkopolis. When getting an item, the ability reroll sound plays. Splattack! is played as the main music and on the last minute of the battle, Now or Never!. 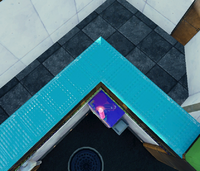 The L-shaped space which sub weapons pass through.

Urchin Underpass is derived from the nouns 'urchin' and 'underpass'. 'Urchin' can relate to both a slang term referring to someone dirty and poor, as well as sea urchins - spiny sea creatures that are round and prickly like hedgehogs. 'Underpass' is a passageway for passengers and cyclists beneath a road or railway, allowing them to reach the other side in safety.