Arowana Mall is a multiplayer stage in Splatoon and Splatoon 2.

Arowana Mall is a narrow battlefield that is set at an outdoor mall, decorated with stores, plants, banners and advertisements. It features two lower sections and one raised section in the center of the map that connects the lower sections.

Arowana Mall is long and relatively narrow with multiple large, central areas and hidden side passages. The spawn point area is accessible to the enemy team. The only way for one team to get to the other side of the map is by going through the center. In the center of Arowana Mall is an area connected by two ramps with relatively large areas at the bottom of the ramps on each side. This location is the site of many skirmishes, but getting around it is simple, as both teams' territories are connected by narrow side passages. On both sides of Arowana Mall, two side passages connect each team's spawn point to the central area. However, a team's base cannot be directly accessed through these passages if a player is entering from the central area. To access these passages, players must swim up small walls located in the central area. Each team's base is an open area with access to their side passage and a lower area that leads an area connected to the central area. It also connects to two platforms near the central area that provide a fast way to ambush the opposing team there, and snipe players from a safe distance. There is water around the center and an abyss to the right-side path as hazards for players to get splatted from.

Arowana Mall received a few changes to the bordering paths in Splatoon 2. The raised plaza to each team's right side now has a grated bridge that connects it with the central platform. A second raised path that goes behind a wall was also added to the outer path on each team's left, and now the posters feature Pearl and Marina, rather than brands.

The Splat Zone for Arowana Mall exists in the very center of the stage where all paths meet and is overlooked by multiple hallways or platforms. In this mode, the side alleys are now linked to the other side of the stage via an added grated walkway over the pools of water.

In Splatoon 2, checkpoints have been added:

The Rainmaker begins in the center of the stage, in place of the informational tower that appears in Turf War and the tower from Tower Control. The Rainmaker must be taken to the platform found inside the lower, rectangular areas below each team's spawn point. 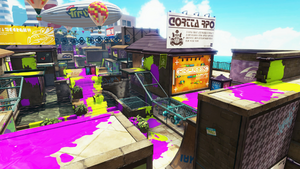 Arowana Mall underwent a series of changes between its development period and release.

There were a few changes made to the map after Version 2.0.0. These include:

Arowana Mall was released with the launch of Splatoon.

Starting with version 2.6.0, Arowana Mall uses the Splat Zones version for Turf War which includes grates, more platforms around the central area to allow players to attack the center more easily, and a stack of boxes to one exit of the side alleys. The grated walkways that connected the side alleys are removed, however.

Arowana Mall was available in the following Splatfests in Splatoon: 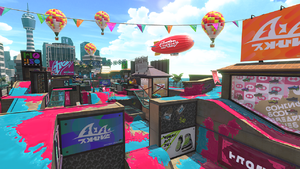 From 1 to 16 March 2018, Arowana Mall was not available due to a notable bug. When players used dualies or the Splashdown in certain areas, they would fall out of bounds. 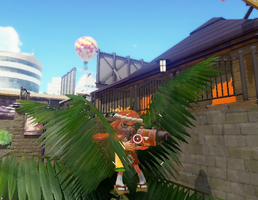 Standing on the palm tree outside Arowana Mall

Arowana Mall is derived from 'arowana' and 'mall'. The arowana is a freshwater fish and a mall is a home for many shops and sales.