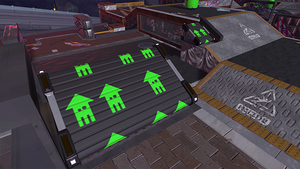 The Maze Dasher is a multiplayer stage in Splatoon 2. It was the seventeenth variation of Shifty Station, and first appeared in the Hero vs. Villain Splatfest and returned in Chaos vs. Order. As of version 5.0.0, it is exclusively available in Private Battles. It features dash tracks, which allow the player to quickly traverse from one side of the stage to the other.

The Maze Dasher is named after the The Maze Runner books by James Dashner. The name references the dash tracks central to the stage's design.